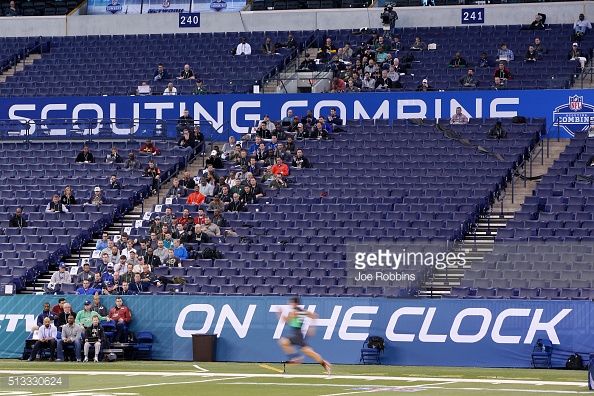 The 2017 NFL combine invite list was announced and the news is not ideal for the Big 12 conference.

To put this in further perspective, Alabama and LSU have 10 players participating, while Texas A&M has 9 and Arkansas has 8. So yes, Texas A&M has exactly half as many invites as the entire Big 12, to which I would say, “Texas Bowl, anyone?” Kansas State beat Texas A&M 33-28.

Awkward day in the Big 12 offices?

Texas A&M has half as many NFL combine invites as the Big 12 combined https://t.co/SMrsi3IJbc #GigEm pic.twitter.com/mXmJHV9nrT

Even the staunchest Big 12 fan would admit this is a concern. Sure, the conference had a great bowl season going 4-2, which included a couple of wins over SEC teams, Oklahoma beating Auburn, and the aforementioned Kansas State handling Texas A&M. Also, the Big 12 only has 10 teams compared to 14 for the SEC, ACC, and Big Ten. That’s 71% of the teams, but the Big 12 doesn’t have close to 71% the amount NFL combine of invites as those conferences.

But while it may just be another chance for the media to pile on the Big 12 and add to their narrative that there are really “4 Power conference, oh, and the Big 12”, the Big 12 isn’t doing itself any favors.

The Big 12 didn’t bring in any 5-star recruits in this latest recruiting cycle, according to Rivals. By comparison, Alabama signed 7 5-star players, while Ohio State reeled in 6. As many coaches, Dana Holgorsen included, have noted, the recruiting rankings can be a bit of nonsense, mostly geared towards the fans and media.

But, if the 5-star players weren’t really 5-star players, then why are Alabama and Ohio State bringing in so many of them. Oh, and why are they continuing to win big?

Are they overrated? Sure. But, they aren’t meaningless.

There’s no doubt the Big 12 has increased competition in the state of Texas. Because of social media, technology, Texas A&M leaving for the SEC, and a handful of other reasons, the best players in Texas are leaving the Big 12.

The conference MUST get back to recruiting the absolute sh*t out of this state. It has the most talent in the country and it’s getting poached by everyone and their mother. Even Bob Stoops is looking to other states for some of his top talent. That’s ridiculous. Bob Stoops and the Sooners have always had a ton of success in Texas (until recent years) and should not back down to anyone in the Lone Star state. They are few-hour drive away from these players’ homes and play a bunch of road games in Texas. The program has had as much success over its existence as any and should not take a backseat to any program or any conference.

There is no other conference that can tell a Texas kid that his folks can drive to most of their games, either home or away. This has to be the biggest selling point the conference uses.

My hope is that with Tom Herman saying he is really going to lock in on Texas players and Baylor’s Matt Rhule hiring a staff that is heavy with Texas high school ties, these two schools lead the way, along with Oklahoma, in solidifying top-tier Texas talent.

Yes, the whole thing is a little overblown, as the Big 12 has had success out of conference, most recently in the 2016 bowl games. So the Big 12 may just be better at identifying talent and have staffs that can “coach ’em up” better than other conferences. That’s all well and good.

But the conference has to start doing everything in its power to stop allowing the state of Texas to be raided by the SEC, ACC and Big Ten. And that has to start now.

Can Jacob Park be the Big 12’s best QB in 2018?
Kansas fans embarrass themselves by leaving Allen Fieldhouse early
To Top