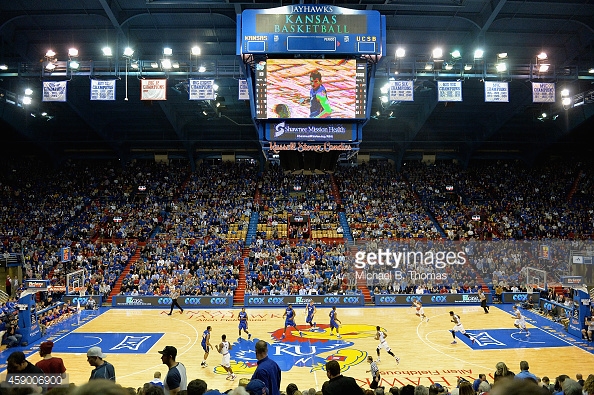 It was a comeback for the ages, but some Kansas fans missed the whole thing.

A handful of Kansas basketball fans started leaving Allen Fieldhouse with a little less than 3:00 remaining on Monday night with the Jayhawks trailing the Mountaineers by 14 points. It was a night where these same fans set the Guinness World Record for loudest indoor arena.

Well those fans that stayed watched a helluva comeback as the Jayhawks beat West Virginia 84-80 in overtime in the Phog.

But what you saw last night with the fans that left the game early was what big-time success can do to soften a fan base. It happened to Yankees fans, Patriots fans, Lakers fans (although LA fans are naturally soft), Alabama football fans, and other fan bases with massive success.

But even head coach Bill Self seemed surprised by the emptying of the arena, saying after the game,“The fans deserve a ton of credit, those that stayed. We had a few that trickled out of here, but they missed a hell of a finish. It was a remarkable game.”

You just don’t leave Allen Fieldhouse early. You don’t. It is one of the Meccas of basketball. The only excuse I could think of would be the following: at the game with your young son or daughter who has school the following day, while your work alarm goes off prior to 4AM. That is it. BUT even that is a lame excuse. What might’ve saved you 10-15 minutes of extra sleep, cost you seeing one of the best comebacks you’ll see in basketball. A memory you and your child would have ALWAYS remembered. I hope the extra sleep was worth it.

In many ways, the fans that left didn’t deserve to see a finish like that. Frankly, Kansas fans who have seen their football program struggle so mightily should have an even greater appreciation for what the basketball team does year-in, year-out.

In a perfect world, we could ID the fans who left the game early and punish them with a forced vacation to Columbia, Missouri.

The only good thing about some fans leaving early is it allowed the ESPN camera crew to easily find this guy in the stands… HE WOULD NEVER LEAVE A GAME EARLY.

Hopefully this was a wake-up call for many Jayhawks fans. Don’t get soft…!! Appreciate every moment, every game, and every win. This level of success won’t last forever.