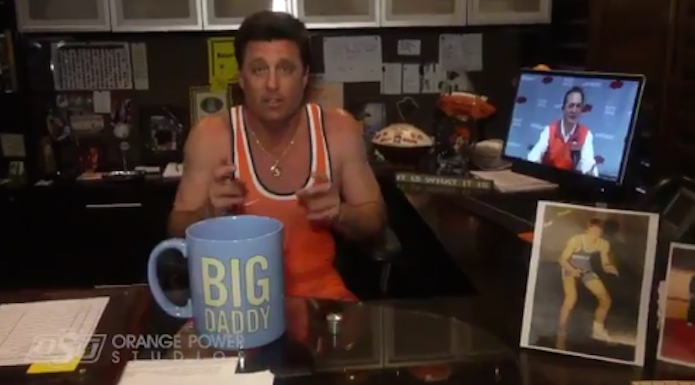 Just when you think you’ve seen it all from the Big Daddy, mullet-sporting head coach Mike Gundy, he goes ahead and shocks you even more.

Well if you didn’t know, there is a No. 1 vs. No. 2 match up this weekend in Stillwater between the top-ranked Oklahoma State Cowboys and the Penn State Nittany Lions in wrestling.

So with Gundy being the “face” of Oklahoma State University (sorry, T. Boone), someone within the athletic department concocted a brilliant idea of using Gundy to brew up interest in Saturday’s match to get the fans to show up.

No. 1 #okstate wrestles No. 2 Penn State in a HUGE matchup in Gallagher-Iba Arena Sunday. Don’t miss it! Tickets: https://t.co/jEx5nG6ezI pic.twitter.com/S7xYgtkdyg

No. 1 #okstate wrestles No. 2 Penn State in a HUGE matchup in Gallagher-Iba Arena Sunday. Don’t miss it! Tickets: https://t.co/jEx5nG6ezI pic.twitter.com/L057voXE0W

For the record, I hope the Big Daddy mug, which first showed up on National Signing Day, starts making appearances at every Gundy press conference. It needs to become a staple of Gundy’s persona, ASAP. Based on this video, I’m clearly not alone in that opinion.

Also, please tell me how, if you’re a 5-star recruit, you don’t want to go play for this man and wouldn’t run through a brick wall for him? I just find that hard to believe. Hell, put me in coach! My 8.5 second, wind-aided, 40-time might not be worth much, but I’ll give it my all!