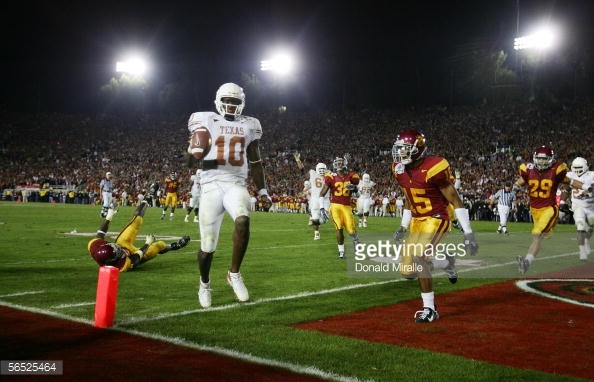 At 33 years old, Vince Young is going to try and get himself back to the NFL.

Agent Leigh Steinberg made this announcement on Twitter on Wednesday night.

Young has been retired since 2014 and hasn’t played in an NFL regular-season game since 2011.

But, with The Spring League starting this year, the timing might be perfect. If you’re not familiar with the league, it is an independent four-team football league made up of free agents. It debuts in April, and will only work with NFL veterans who do not have contracts.

Teams will train at Greenbrier Resort in White Sulphur Springs, West Virginia, from April 5 through April 26, and a total of six games will be played in the league.

According to reports, the league has publicly expressed interest in adding Young. It is being run by investors who have no ties to the NFL, so they’re naturally trying to draw names that will be of interest to fans. The former Texas QB was the No. 3 overall pick in 2006 and went on to earn Rookie of the Year as the Titans quarterback. He made a pair of Pro Bowls during his career in 2006 and 2009.

Most recently, Young has been working at his alma mater, as a development officer in its division of diversity and community engagement, a job that reportedly is paying him around $100,000 per year.

But it hasn’t all been pleasant off the field for the former Texas QB. Young was sentenced to 18 months probation in January after pleading no contest to a DWI charge.

I have no idea what Vince Young has left in the tank, if anything, but it’s a no lose situation. The league is trying to gain some traction and Young was the face of one the biggest college football programs in America and helped them win a National Title. People will at least check out Vince Young out of intrigue.

Hell, maybe if Tim Tebow has a terrible spring training with the Mets he will take a month off a join this Spring League in April. You want to talk about an investor’s dream…

Big 12 recruiting: Re-ranking the 2014 classes
What happened to ‘Texas Forever’ pride?
To Top