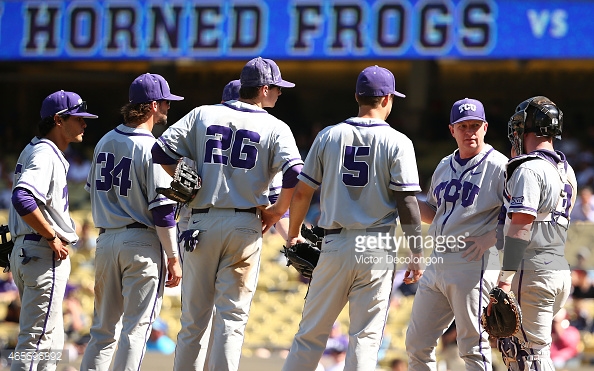 Big 12 baseball season is back and the conference features the unanimous No.1 team in the land. While the Lone Star State has been struggling in football recently, they are certainly the cream of the crop when it comes to baseball. The top four teams this week come from Texas, and the top three made the 2014 College World Series. How did your team fare on opening weekend? If they aren’t from Texas, you may want to close your eyes.

They are the No.1 team in Big 12 baseball and the No.1 team in the nation, and they are off to a perfect start. TCU was expected to sweep a northern-based Penn State team, and did so without any problems. Nolan Brown returned nicely after redshirting in 2015 due to a hand injury. He finished 5-for-9 with five rbis, four runs, and two doubles. This is a dangerous team and will be favored to win the College World Series for the next couple of years.

Tech nearly left Starkville, Miss. undefeated, but host Mississippi State caught the hot-hand late. Still, the Red Raiders split their series on the road against an SEC-school who made an appearance in the 2016 Super Regionals. Not only that, but Tech cruised past Western Illinois twice. Keep an eye on Hunter Hargrove. He hit for five extra-base hits on the weekend, including two homers. When looking at the Big 12 baseball landscape, Tech is right up there.

Neither Rice nor Texas are the perennial powers they used to be. However, they are still respectable programs and David Pierce is a solid replacement to the legendary Augie Garrido. The Longhorns split a four-game series against Wayne Graham’s Owls. Kacy Clemens propelled the offense this weekend by hitting over .500, scoring four runs and bringing in three rbis. Things are looking up for Texas right now.

The main reason Baylor is this high is because the rest of the conference dropped the ball on opening weekend in one form or another. A sweep against Niagara at home is expected, but the Bears did something not a lot of Big 12 teams can say: they took care of business. Tougher times lie ahead for Baylor, but it’s opening weekend. The cupcakes are more than willing to travel to warmer weather and get spanked. Shea Langeliers was notable during the series by stepping on home plate six times and bringing in four runs with his bat.

Oklahoma took two out of three against a Long Beach State team who is ranked in two of the five national polls. Collegiate Baseball has the Dirtbags (yes, that is the official nickname of Long Beach State baseball) as high as No.17. This should be considered a nice outing for the Sooners, but the jury is still out on just exactly how good both of these teams are. Jake Irvin is off to a tremendous start this season. He tossed seven shutout innings, racking up 10 strikeouts in the process.

After a rough outing against Ohio State on opening day, Kansas State bounced back nicely. After shutting out Delaware and edging Pitt on Saturday, the Wildcats scored revenge on the Buckeyes with a 3-2 victory Sunday. It will be tough to figure out just how good Kansas State is this year until conference play hits. The only opponent worth considering a true test is South Carolina, but that’s a midweek game. In case you are new to the college baseball scene, midweek games typically feature what would essentially be a spot starter in Major League Baseball. Many mid-major teams “upset” Power Five conference teams because they’ll throw their ace against a freshman on the Power Five team. Again, the South Carolina game still will not be a true test.

The Cowboys traveled down to Grand Canyon and dropped its opener. This series still has one more game to play, but the Cowboys didn’t exactly compete in the first game. This is alarming. The only run they scored came in the ninth inning. Grand Canyon forced Oklahoma State to use seven pitchers on day one. That’s not good for the bullpen, who will certainly be used when the Cowboys play a road game against Arizona State Tuesday. It may be a rebuilding year for Josh Holliday. He only has five seniors on the team.

We can give the Jayhawks a bit of a break for sporting a losing record right now. They played a solid Virginia program, which won the 2015 National Championship. A loss on the east coast against the Cavaliers is expected. What isn’t was an embarrassment. The Jayhawks dropped an 8-1 decision against Liberty. The lone victory for Kansas came against The Citadel. Kansas was picked to finish last in the Big 12 Conference, so perhaps 1-2 with a loss to Virginia can be considered a moral victory somehow.

Pulling up the rear in the Big 12 baseball rankings are the Mountaineers. Prior to its first victory of the season Sunday, Charlotte outscored West Virginia 18-5. The 49ers are picked in the middle of the pack of Conference USA. Sure, there are some good programs in that league, but the middle of the pack is not considered to be well for that conference. What’s frightening for the Big 12 Conference is the fact the Mountaineers picked up Jim Schlossnagle’s first place vote in the preseason poll. It kind of makes you wonder what he sees in a team who struggled so much on opening weekend.

Fan trying to sell Bedlam tickets for $300 … EACH?!
Which Big 12 coaches would make the best politicians?
To Top