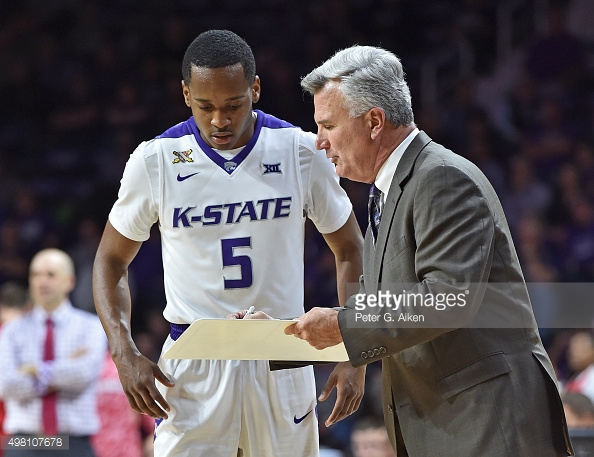 As the Wildcats take the court to take on the Oklahoma State Cowboys tonight, they will be entering a possible tipping point for the team, but almost certainly one for some of their fans. It is no secret that many Wildcat fans were, and still are upset that Brad Underwood is not pacing the court in Bramlage Coliseum for every game.

Unfortunatly, we live in a world where fan bases can have a coach removed because of unreached expectations, sometimes but not always, unfairly set by them. For proof of this, just look at what has taken place at NC State. Mark Gottfried was fired halfway through a rough season for the Wolfpack. In his sixth year Gottfried has a 122-83 record with four NCAA tournament appearances, and two Sweet 16 appearances. Before the two Sweet 16 appearances by Gottfried led teams NC State only had nine in the previous 98 years.

Then there’s Bruce Weber, halfway through his fifth year sitting at 96-64 at Kansas State. In his first year with the Wildcats, Weber led them to their first conference title since 1977 under Jack Hartman. In his first two years at the reign he led the Wildcats to the NCAA tourney, only to lose in the first round to Sweet 16 LaSalle in year one and national runner-up Kentucky in year two. Years three and four Weber failed to reach the tourney which has led to many unhappy fans, which is not totally uncalled for. However, year five has to play out before judgement should really be made.

Let’s not forget that Coach Bruce Weber did what almost all fans want their coach to do, or so they say. He got rid of a player that was by all accounts poison for the locker room, and appeared to have a discipline problem despite his talent. What would this year’s team look like with Marcus Fosters 18.6 points per game?

Nonetheless, the road ahead is clear for Bruce Weber and the Wildcats, and is actually full of opportunities. If the Cats can win their final four regular season games they will finish 21-10 and a 10-8 conference record that will almost certainly get a fifth place finish in the conference and a solid single digit seed in the NCAA tournament.

Just getting to the tournament may not be enough for some though. I’m afraid that anything less than a Sweet 16 appearance will not quiet the chants for coach Weber’s job. Certainly another 1st round exit will not be met with joy.

This team is literally just a few baskets away from being solidly in the top 25 and wondering what seed they will be instead of wondering whether or not they be in. While ultimately every shortcoming falls on the head coach, you have to wonder when an on-court leader will emerge and be “the guy” in those game winning/losing scenarios. Its clear that this player has not emerged yet, that’s why every time they are in that scenario it’s a different player taking the shot. Until someone steps up and becomes this player they will always struggle in these tight scenarios because they will all be looking around to see who’s going to take the ball and go win the game in crunch time.

While I believe that this team is capable of being giant killers, being capable of, and accomplishing, are two very different things. If Weber hopes to kneel along the court in Bramlage next year, the time is now and the task is clear. This team must finish with at least 3 wins in the final four games, have solid showing in the conference tournament, and win an NCAA tournament game.

However cliché it may sound, it starts with one game and one win. The players need to step up and show everyone that they are in the right hands. If they ultimately fail to do so, AD John Currie may give the fans what some of them have wanted since the moment Bruce Weber walked up to the podium for his first press conference.

Which Big 12 coaches would make the best politicians?
Texas Tech spring practice: Who’s the next quarterback?
To Top