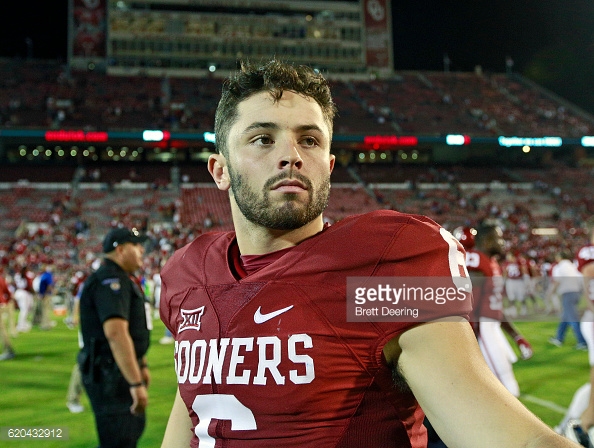 Mayfield went on to apologize to the Oklahoma University administration and coaches.

Key quotes from the Oklahoma quarterback include:

“I made the biggest mistake of my life by putting myself in this situation. I know that I represent the University of Oklahoma on a very large scale, therefore I know better than to bring bad attention and scrutiny to the school and people that I love.”

Baker Mayfield went on to apologize to his family and close friends, adding, “I know you will forever tell me it is okay and that you are not mad or upset with me, but  I was raised better.”

Lastly, Mayfield apologized to Sooners fans, saying, “I know I have brought shame to the University that we love. I have an enormous feeling of embarrassment because of my actions.”

Mayfield ended by saying he wishes he could apologize to every single person he has affected, but he promises to earn their respect back.

Mayfield won’t get in trouble and frankly, I don’t think he really should. Stupid college kid? Yes. Felony or serious misconduct and action? Nope. Sorry. If I’m Bob Stoops I’m not taking any serious actions against Mayfield.

With that being said, when Mayfield mentions his family will “forever tell him it’s okay and that you are not mad or upset with me”, I wondered… why? Even though he was being a dopey college kid, it doesn’t mean his parents shouldn’t be pissed off at him for acting like an idiot. That is different than whether or not he should be punished by the program.

All in all, I hope Baker Mayfield learned a lesson or two and everyone can now move on.