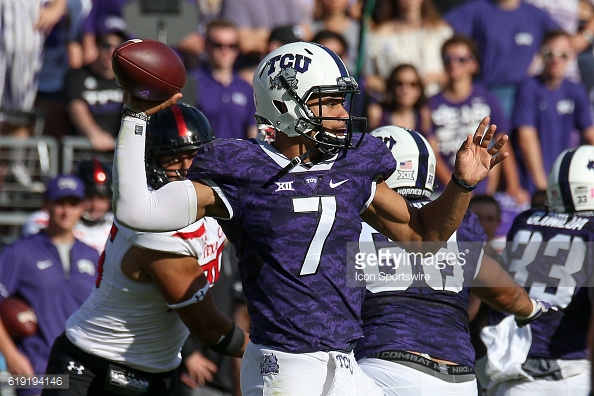 TCU spring practice is right around the corner and the Horned Frogs are definitely looking to improve in 2017. Coming off their 2nd losing season (6-7) in the last decade, head coach Gary Patterson is searching for answers, especially at quarterback. The loss of superstar Trevone Boykin was tough, but the Frogs are learning the hard way just how difficult it is to win without solid quarterback play. So let’s take a look at the list of candidates who could be the signal caller for the 2017 season shall we?

Everyone remembers Kenny Hill for bursting onto college football scene back in 2014 with Texas A&M. He was next in line to replace Heisman winning quarterback Johnny Manziel (insert beer emoji here). After leading the Aggies to a 5-0 start (stop if you have heard this before), Hill’s time in College Station went south in a hurry. After transferring to TCU in 2015, Kenny Hill was next in line to replace another great quarterback in Trevone Boykin for the 2016 season. Unfortunately for TCU, we saw the same Kenny Hill in 2016 as we did back in 2014. Hill finished the 2016 season averaging 246.8 yards per game and tossing 17 touchdowns with 13 picks. He also completed 61% of his passes this past season.

I almost have a love/hate type feeling for Kenny Hill. He does some things that will make you say wow in either a good or bad way. Kenny has a solid arm to push the ball downfield and can be a good quarterback in the pocket. The thing that a lot of people don’t give him enough credit for is his running ability. Hill finished 2nd on the team in rushing yards (813) and rushed for 10 scores this past season. With the positives for Kenny Hill come the negatives. Kenny will make some decisions that will make Sonny Cumbie want to pull his hair out at times and that is what has hurt him the most. He throws bad interceptions at worse times. I also see him struggle a lot with his intermediate passes in the 10-20 yards range. He is so sporadic that his play is like a roller coaster of emotions but most of it is mental in my opinion. This is a guy who needs to clean up his play or else he WILL be replaced and it could be as early as TCU spring practice.

After leading DeSoto High School (DeSoto,TX) to win their first ever state championship, Shawn Robinson had literally done it all in his high school career and is ready for TCU spring practice. As a 4 star recruit and being one of the most sought after quarterbacks in all the country, Shawn decided to stick with the local school, TCU.  In his high school career he rushed for over 1400 yards 3 times and wrapped up his senior campaign with 3413 passing yards and tossing 28 scores on 9 interceptions. Shawn was ranked as the 7th dual threat quarterback in the country according to 247 as well as being a top 200 player overall. Robinson is an early enrollee and is already on campus and gearing up for TCU spring practice.

It’s very easy to see why so many big time schools wanted Robinson. Luckily for TCU they got one of the best players in the entire 2017 class, period. Shawn is a big bodied guy at 6’2, 215 pounds. He has the ability to run the football not only on the edge but between the tackles like an extra running back. Now he isn’t always looking for contact but he isn’t afraid to take some hits as well as dish a few out from time to time. Shawn has got a rocket arm to go with his big frame. Whether it’s on the run or in the pocket, his arm strength should never be questioned. There aren’t many red flags but I would like to see him be a little more consistent with his passes. This may have been a timing issue with his receivers since he only played his final year at DeSoto, but his accuracy could use a little work. The only other question I have is if he can make those fast paced decisions running this offense. He had a ton of time in the pocket because his team was just that good. I want to see him in more pressure situations to see how he can handle it. Overall this was a HUGE get for the Horned Frogs.

Before I announce my pick, I know what you are thinking. How come there are just two candidates for the starting job? What about Grayson Muehlstein or Brennen Wooten? Those guys are nice to have as backups but let’s not fool ourselves here. They aren’t much more than solid backups in case of emergencies. I am talking about starting quarterbacks, not backups.

With that being said, I have to give the edge to Kenny Hill ahead of TCU spring practice. While that may not excite most fans, he is the most proven quarterback on the roster so far. Besides, he is the ONLY quarterback on this roster who as actually thrown a pass on the collegiate level for crying out loud. With the transfer of Foster Sawyer (Stephen F. Austin), it’s either going to come down to a 5th year senior or a true freshman. If the season starts going south, then expect the Frogs to throw Shawn Robinson into the fire. TCU is returning a lot of starters in 2017 and Gary Patterson does not want this year to be a rebuilding year like 2016. The chips are all on the table for Kenny Hill and it will be up to him to either win now or walk away empty handed.