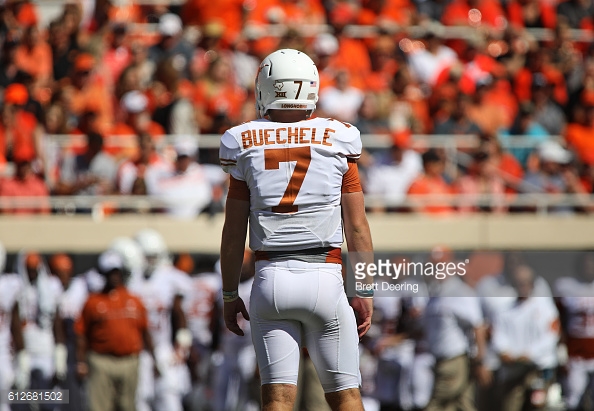 Texas spring practice is right around the corner (March 7th) and the Longhorns are on their third head coach in the last five years. Since their national championship appearance back in 2010, Texas has a record of 46-42 (ouch). Change is coming once again in Austin as Tom Herman is the new man in charge, looking to bring back the swagger that the University of Texas once had. Even with all the new faces on the coaching staff, the biggest question is who is going to be the starting quarterback heading into 2017?  Texas has desperately been searching for a signal caller since the Colt McCoy days. With arguably their best collection of quarterbacks on the roster since 2009, let’s take a look at the list of candidates who could be the next field general in Austin shall we?

Getting thrown into the fire as a true freshman is never easy, especially at quarterback. Shane was the first true freshman quarterback to start a season opener at Texas since Bobby Layne did it back in 1944 (no pressure right?). On a national stage against Notre Dame, Shane Buechele shined and some even claimed that Texas was “back” (cough, ESPN). For a guy that who drew a lot of comparisons to Colt McCoy, he started looking less like him each and every week as the season went on. Whether that was totally on Buechele or the stale offensive scheme in general, there is no doubt Shane has some work to do. With that being said he did have an ok season as a true freshman. Shane finished the 2016 season with 2,958 passing yards while tossing 21 touchdowns on 11 picks. He also completed 60.4 % of his passes.

Derek’s Take: Shane is a nice quarterback to have on the roster. He is reliable and he does everything a coach would ask him to do. Buechele has some good traits that a quarterback should have but lacks the traits that an elite quarterback does have. The one thing about Shane that sticks out to me is that he is very intelligent on the football field. He knows where to go with the football but maybe lacked the experience at times with his timing on throws. Shane has some of the prettiest touches you will see on deep passes and was one of the best in the Big 12 throwing downfield. For a true freshman he has excellent pocket awareness and isn’t afraid to take a hit to complete a pass. The only real negatives that I see are his arm strength and his size. He doesn’t have that rocket arm that you see in elite quarterbacks and his size is concerning when taking those big hits, especially in this new offense.

It’s hard enough winning the Texas state Gatorade player of the year, but to do it as a junior? That takes some serious skill if you ask me. After leading Westlake (Austin, TX) to a 6A state title appearance in 2015 (his junior year), Sam finished his junior season with 3,833 passing yards and 70 combined touchdowns (50 passing & 20 rushing)! He also completed 61 % of his passes and rushed for 1,360 yards to go along with his magical season back in 2015. After a monster junior season, Ehlinger’s stock grew as he gained national attention. That didn’t matter to Sam who committed to Texas back in July of 2015 and who also grew up a lifelong Longhorn fan. If his junior season showcased his skills, then his senior showed you his toughness. Sam tore his MCL in his first game his senior year only to come back a month later to fracture his thumb.

While most would have called it a career with a Texas offer on the table, Sam Ehlinger kept fighting back. Six weeks later he made a surprise return.  He played through injury for two playoff games, until that came to an end when he broke his wrist in his final game at Westlake (he played almost an entire half that game with the broken wrist). Ehlinger enrolled at Texas in January of this year and was ranked as the #1 QB prospect in Texas as well as being ranked the 4th ranked dual threat QB in the country according to 247.

Derek’s Take: If this young man doesn’t impress you, then who will? I have seen Sam play many times in person and when you watch him; you know you’re watching someone special. He is an absolute field general under center or in the shotgun. He has a really great feel for the game when pass rushers are in his face and his still is able to get the ball completed or use his athleticism to escape the pressure. Ehlinger maybe isn’t the fastest guy on the field but he has just enough speed to keep defenses alert. Now he isn’t going to blow you away with his arm strength but he is so accurate with his throws and knows how to move the chains at all cost. The guy reminds me of a mix of Tim Tebow (tough runner) and Colt McCoy (passing). What I love most about him is his toughness to run the football in between the tackles. He isn’t shy of any contact and has a win at all cost type attitude.

There is no doubt that Shane Buechele will be the starter going into Texas spring practice, but come Saturday September 2nd, Sam Ehlinger will be the starting quarterback. The reason Sam Ehlinger will be the starting quarterback is mostly due to fit. Ehlinger fits Tom Herman’s new smash mouth spread brand off football better than Shane Buechele would. Sam has the running capabilities that Shane simply does not have. Both guys are smart enough to run the offense but Ehlinger’s ability to run inside and outside puts him over the top. In this offense the quarterback will take some hits and will be as much as a part of the running game as a running back would. This is where Sam Ehlinger could really shine in this offense using his strong body to be the next great Texas quarterback Longhorns have been dreaming of.

Big 12 schedule: Two games move to Black Friday
How much do the Missouri Tigers miss the Big 12?
To Top