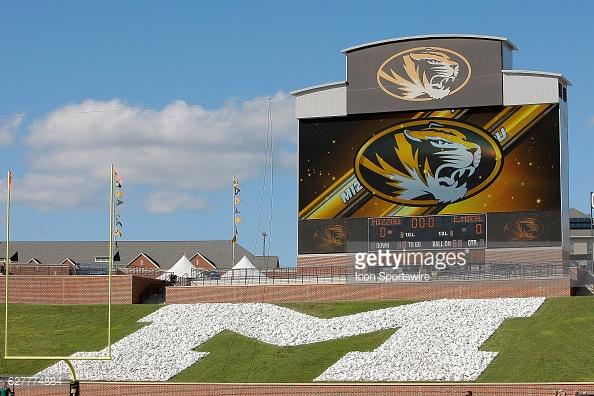 It’s the final Saturday of the college basketball regular season and the Missouri Tigers just fell to 7-23 on the season, losing to Auburn 89-78. Mizzou has now lost 35 straight road games. Unbelievable. The downfall of Missouri basketball arguably came at the tail end of their final season in the Big 12. At the end of the 2011-2012 season, the Tigers ended their run with the Big 12 finishing in 2nd place in the conference and earning a 2 seed in the NCAA Tournament. But the Tigers fell in the first round to 15 seed Norfolk State.

Since then the Tigers fell off a cliff in the SEC, Frank Haith “left” for Tulsa, Kim Anderson was hired and recently fired, and Missouri has finished dead last in the SEC the past two seasons.

Meantime, the football program has seen a similar fall from grace. As recently as 2010, the Tigers’ 2nd to last season in the Big 12, Missouri won the Big 12 North under Gary Pinkel. The Tigers joined the SEC in 2012 and in their 2nd and 3rd seasons in their new conference, 2013 and 2014, Missouri won the SEC East.

In 2015, the Tigers slid to a 1-7 record in conference play and on November 13, 2015, Pinkel announced he would retire at the end of the season. He said that he has non-Hodgkins lymphoma, and wanted to spend his remaining years with family and friends.

In Barry Odom’s first year, the Missouri Tigers finished 4-8 overall and 2-6 in SEC play, finishing in 6th place in the SEC East.

To add insult to injury, Missouri lost its Athletics Director Mack Rhoades to the Baylor Bears, who were in the midst of a sexual assault scandal that was rocking the University in Waco. Mixed into all this were protests of alleged racist issues on campus that led to the President resigning, but may have been very well based on several lies.

So while Missouri fans, just like Texas A&M fans, were bragging about leaving the Big 12 for the SEC just a couple of short years ago, it’s fair to wonder if they regret the decision.

Sure, SEC schools are getting paid more than any other conference in the country, upwards of $40 million, courtesy of lucrative television contracts, including the SEC Network.

But next week the Tigers basketball team will make the trek 430 miles southeast to Nashville, Tennessee to play on the first day of the SEC Tournament at the Bridgestone Arena. Meantime, less than two hours to the west, the Big 12 tournament will tip off in their backyard of Kansas City. Old rivals like Kansas, Kansas State, Iowa State and other familiar faces will take the court to try and make a last ditch effort to make the NCAA Tournament and improve or just solidify their seeding for Selection Sunday.

The football program is playing in an SEC East that is the furthest thing from a geographical or societal fit with Georgia, South Carolina, Florida, and others. Not only that, but they find themselves in playing SEC football just as the conference has started its decline. The SEC is Alabama and everyone else right now.

At least if Mizzou could’ve worked its way into the SEC West, it would’ve had a familiar face in Texas A&M and more geographical fits such as Mississippi and Mississippi State.

The Big 12 isn’t exactly a cheap conference. It’s still paying out over $30 million to its members. Is that extra $10 million really still worth it to Missouri? The loss of rivals, geographic fits, like-minded Universities, and general relevancy? Even when winning the SEC East, the Tigers were an afterthought. In the Big 12, they weren’t.

It’s been a busy few years both on and off the field and courts for the Missouri Tigers athletics department. Maybe leaving the shadows and getting out of the stranglehold of Texas, Kansas and others was worth it.

I would ask the question again… was it really?

The obvious answer to me is “No.”