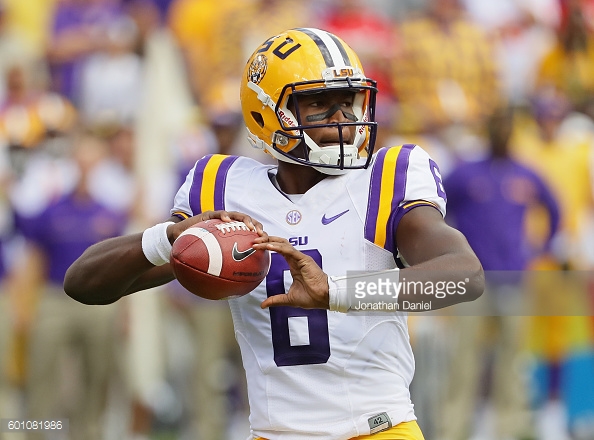 The quarterback position has been an issue for the Texas Longhorns for nearly a decade. While it seems like they are finally turning the corner with a couple of quality options in Shane Buechele and Sam Ehlinger, Tom Herman is not getting comfortable. According to a report from the Baton Rouge Advocate, former LSU QB Brandon Harris will visit Texas, along with North Carolina, Arizona and a fourth “mystery” school.

Harris is a rising senior who would graduate this summer so he could be eligible to play somewhere else in 2017. He started 15 games over his career at LSU over three seasons. But last year, Harris and the Tigers lost the opener to Wisconsin 16-14 and the quarterback struggled, completing just 12 of 21 passes for 131 yards with 1 touchdown and 2 interceptions. In the second game of the season against Jacksonville State, Harris was replaced by Danny Etling and never played again.

Harris was recruited by Tom Herman when the Texas head coach was still the offensive coordinator at Ohio State, so the two know each other well. But it still seems like an unusual fit, considering how poorly Harris played at times at LSU and the fact that he never lived up to expectations.

Plus, Texas seems to finally have a couple of good options in Shane Buechele at Sam Ehlinger. Harris might just simply stunt the growth of one or both of the young quarterbacks.

From Brandon Harris’ perspective, Texas is probably the worst fit as well. At North Carolina, Mitch Trubisky left for the NFL Draft and his back up, Nathan Elliott, took just 9 snaps last season. At Arizona, junior Brandon Dawkins started most of the season, but didn’t play all that well (54% completion, 8 touchdowns, 6 interceptions, and 13 sacks).

Frankly, I hope this doesn’t work out for Texas. Harris just isn’t a good enough player to impede on the development and momentum of Buechele and Ehlinger.

We’ll keep you posted on what happens.