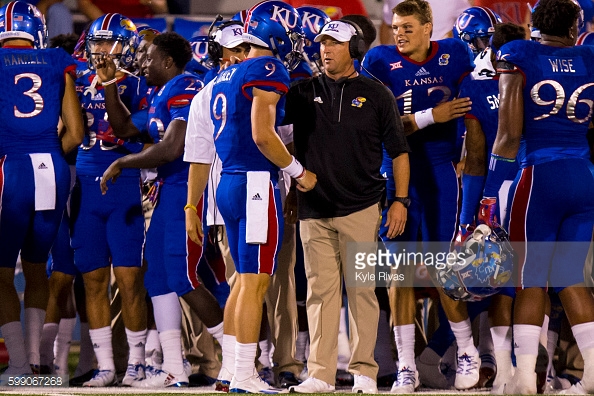 Kansas spring practice kicked off last Friday (March 10th) and the Jayhawks certainly have some holes to fill on the depth chart. Head Coach David Beaty is entering his third season in Lawrence and after going 2-22 in his first two seasons; he surely is ready for his team to start turning the corner. Kansas has had their fair share of issues, but none have been bigger than the all-important quarterback position. The Jayhawks have been searching for answers at the position since the Todd Reesing era (2006-2009). Is this the year Kansas will find their quarterback of the future? With Kansas spring practice officially here, let’s take a look at the list of candidates who could be the starter for the 2017 season, shall we?

After redshirting at Washington State under former Texas Tech head coach Mike Leach in 2014, Bender finally saw his first collegiate snaps in 2015. Falling behind eventual starter Luke Faulk, Bender started his one and only game against Washington in the annual Apple Cup (falling 45-10). Peyton finished the 2015 season with 3 passing touchdowns on 4 picks while completing 58% of his passes. In the summer of 2016, Peyton Bender was ruled academically ineligible for the entire 2016 season at WSU. He then chose to transfer to Itawamba CC in Fulton, MS to try and bring his grades up, while still playing football to stay sharp. There Bender was the starting quarterback this past season throwing for 2,739 yards while tossing for 21 scores on 4 interceptions. He also completed 65% of his passes in his first season as a starter. After a spectacular 2016 season, Bender then accepted a scholarship at the University of Kansas to play football. Peyton was ranked as the 6th best pro-style quarterback for JUCO prospects, according to 247.

Derek’s Take: Peyton Bender is the true definition of a pocket passer at quarterback. The thing about Bender that I really like is his ability to make quick decisions in a fast-paced passing attack. This is key when running an up tempo offense that likes to spread the ball around. He will not “wow” you with his arm strength, but he does have a nice arm when he steps into his throws. There are, however, some areas of concern that I have with Bender. There are too many instances where his deep passes turn into 50/50 balls that could go either way. Fortunately for Peyton, they went his way quite often. I wouldn’t expect to see that a lot at the next level, especially at Kansas. He also has a tendency to force too many throws into tight windows. As with all true pocket passers, Bender isn’t exactly the most mobile guy on the field. He stays in the pocket as long as he can and doesn’t have the escape ability to get past the first defender in his face. Overall, Peyton Bender is an upgrade from some of the previous quarterbacks Kansas has had but is still raw in many ways. It will be fun to watch his progress during Kansas spring practice.

With Kansas spring practice now here, let’s remember there aren’t many quarterbacks left on this roster (Montell Cozart, Ryan Willis and Deondre Ford all transferred). Carter Stanley was the first quarterback commit head coach David Beaty had gotten with his staff. Rated as a 3-star prospect (according to 247) out of Vero Beach, Florida, Carter chose Kansas and was part of the 2015 recruiting class. After redshirting in 2015, Carter was forced into action in 2016 due to poor quarterback play from Montell Cozart and Ryan Willis. The last few games of the season are where Stanley played most of his snaps, starting 3 of the final 4 games for the Jayhawks. In those 3 starts Carter Stanley got better each game and even led Kansas to their first conference win in 2 years. Stanley finished to 2016 season with 959 passing yards along with throwing for 6 touchdowns on 6 interceptions. He also completed 59.6 % of his passes to close out the year.

Derek’s Take: Most people did not think that Carter Stanley would be the Kansas starting quarterback at the beginning of the season (including myself). After being thrown into the fire, Carter actually played quite well for his first time on the big stage. Carter has some nice zip on the football when firing passes and is able to make things happen with his feet. He doesn’t have breakaway speed, but he has the ability to escape the pocket and take off when needed. The thing about Carter that I really like is his toughness. As a freshman he showed time and time again no matter how hard you hit him, he always gets back up to fight another play. Now he could learn a thing or two about sliding to avoid some of those big hits, but I am sure coach Beaty will address this during Kansas spring practice. One thing Carter needs to improve on is his decision making. At times he looked a bit lost on where to go with the football (as most freshmen do), so hopefully another year under his belt will help. He showed flashes last season but I want to see it more consistently.

Whenever a guy is able to come in to lead the way to your first conference win in nearly two years, as well as making your offense click, you should probably stick with the hot hand. That hot hand belongs to Carter Stanley. After some growing pains last season, we saw before our very eyes a young man that got better and better as the season went on. When your 2-22 in the past two seasons and find a little spark, you do whatever you can to keep it going. Even though Bender is a year older than him and the two will be in a QB battle during Kansas spring practice, Carter Stanley has more game-time experience at the D1 level. I am not sure that Peyton Bender will be able to force the football and make high risk throws at this level of competition without paying a price.

Carter Stanley has the will and leadership qualities that you love to see in such a young quarterback. His athletic abilities will bring in another dimension of the new look Doug Meacham offense that we didn’t see last season. Stanley is entering his third season at Kansas and I expect him to take that next step to be the starting quarterback this year.