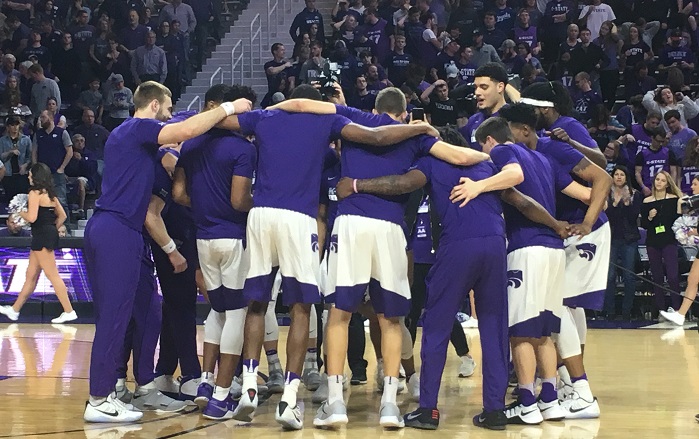 The time for dissension and division in Wildcat Nation is over, at least for now. All Kansas State Wildcats fans had one goal at the beginning of the year, make the NCAA tournament. Well here we are on the precipice of the madness and we have a seat at the table.

While I have been called a “Weber apologist”, and a “settler”, I do understand the anger that is out there among some of Wildcat Nation. This roller coaster of a season has been filled with heartbreak, anger and joy. From the walk-off loss to the team down the road, the win over Huggins and his boys, the road win over second ranked Baylor, and who could forget the 30 point stomping at the hands of the Sooners. But after all of that here we sit with a chance, and isn’t that what we all really wanted?

This group of young men that represent our school have fought hard to get where they are and they deserve our support. I’ve been critical in the past of some of the fans for not showing up for home games to support the school and players, even if you don’t like the coach. I don’t apologize for that. We are a family and we are better than that.

If you’ve never been to a senior night game, for whatever reason, you should really try and make one. To see those players so proud of where they are and what they’ve done, and then have them look into the stands at empty seats is heartbreaking.

But all of that is behind us now. Tonight our boys take the court in a very winnable game, and Wildcat Nation needs to be loud and proud, even if it’s from your couch or a barstool.

We have all seen this team be so great they can play with anyone, and that’s why I love where we ended up in the bracket. Wake Forest is no doubt going to be a tough game, but it is also a very winnable game. Of course, it all starts with defending big man John Collins. He is averaging 18.9 points per game and 9.8 rebounds per game. However, senior DJ Johnson is just as big as him and a very capable defender. The transformation that DJ has made both physically and as a player is nothing short of amazing, and as long as he doesn’t get off the bus with two fouls already counted against him, then I have absolute faith that him and budding big man Isaiah Maurice will be able to patrol the post and lead our boys to victory.

What worries me and many in Wildcat Nation is the constant concern of, where will the points come from? If the defense can continue to play the way they have the last three games, then I have little doubt this team will score enough points to win tonight. Sophomore Barry Brown seems to have returned to the early-season form and broken out of his slump. Senior Wesley Iwundu has continued to improve his outside shot while being a great slasher. And sophomore Kamau Stokes is becoming a great point guard in what’s probably the best league in the nation as far as quality of point guards. If sophomore Dean Wade can regain what appears to be some lost confidence and return to being the player that we have all seen him be, then this Wildcat team could make a run much farther into this NCAA Tournament then most people give them a chance too.

At least one team that has played opening round games in Dayton has made it to the round of 32 every year. Two have made it as far as the Sweet 16, including LaSalle in 2013 (still hurts). So what I’m getting at is, have faith, show some pride, and let’s all hope that by the time this season is over in a few weeks or longer that we are all proud of the young men wearing our university’s name on their chest and the coaching staff that helped lead them there. That’s our job as Wildcat Nation. EMAW and go Cats!