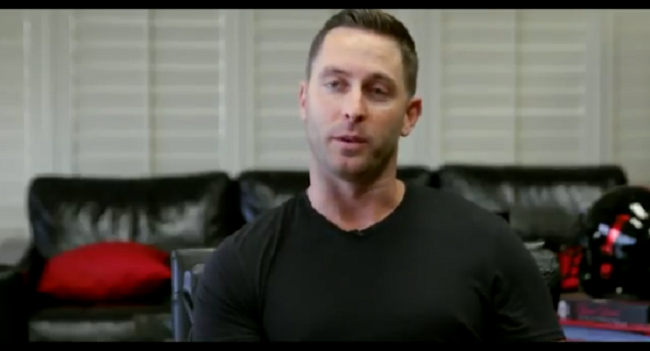 As Kliff Kingsbury and the Texas Tech Red Raiders look to bounce back from a disappointing 5-7 season that included a 3-6 mark in Big 12 play, Kingsbury is taking a new approach this spring. No players will be allowed to wear the Texas Tech Double T logo in the team facilities.

It appears like Texas Tech is taking us on a bit of a journey with their social media “mini series”, where players and coaches will explain how and when the team is able to earn back the Double T logo.

The initial video was released on March 1st, with the hashtag #EarnTheDoubleT.

Until further notice, the Double T is not allowed to be worn inside the football facility. Learn more this week… #WreckEm#EarnTheDoubleTpic.twitter.com/Kgf6Av9MJJ

The most recent “episode” was released on Monday, and was a bit more in depth.

Until further notice, the Double T is not allowed to be worn inside the football facility. Learn more this week… #WreckEm#EarnTheDoubleTpic.twitter.com/Kgf6Av9MJJ

In the video Kingsbury talked about how the team will start with ugly brown t shirts, and work their way up the rankings before the logos come back. Kingsbury gave more detail saying, “Along with the no Double Ts, we have kind of a ranking system with the shirts.We’re going to start with brown, and you work your way to gray, and then white, and black, and red. But you have to earn it. It just comes down to doing everything right off the field. If you miss a class, you get knocked, if you don’t show up to breakfast on time, you get knocked. So you’re doing everything right plus passing the physical tests that we’re putting them through.”

Granted, Kingsbury isn’t the first coach in college sports to try this. Coach K gave it a shot at Duke earlier this year. It’s working out pretty well for the Blue Devils, as they enter the NCAA Tournament as one of the hottest teams in America.

On the flip side, former Texas Longhorns head coach Charlie Strong did something similar in 2014, when he took the Longhorn logo off the helmet of Texas players. That obviously never panned out.

Patrick Mahomes is gone to the NFL, but my concerns aren’t on the offensive side of the ball. But if the Red Raiders can’t fix a defense that finished 128th out of 128 teams allowing 43.5 points per game, then it doesn’t matter if they play with a Double T logo, without one, or even without helmets all together, the team is going to suck.

It’s really that simple. Hopefully Kingsbury can get this ship turned around.