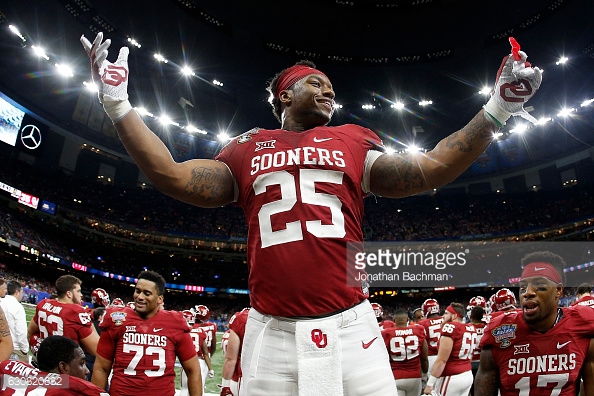 With the NFL Draft only 6 weeks away, players are rapidly rising and falling. One of those on the rise is Oklahoma running back Joe Mixon.

Mixon is undoubtedly a first-round talent, but he’s been hampered by off-field issues, most notably when he punched a female OU student in the head back in the summer of 2014.

After the video of the Mixon punch was released a couple months ago, it was long debated whether or not Mixon should enter the 2017 NFL Draft or play another season in Norman and let the whole thing blow over. Well, the running back, who had proven his abilities on the field, rushing for over 2,000 yards in his 2 years at Oklahoma, decided to enter the NFL Draft this year.

Mixon’s willingness in recent weeks to address the character issues that have swirled around him after he was caught on video punching a woman in the face has transformed his image, according to that team official. Not just within that team, but around much of the league.

Indeed, people around the NFL now tell me Mixon is moving up draft boards.

Freeman goes on to report that he is hearing Mixon is likely a second round pick, but could go as high as late in the first round. Of course, as Freeman notes, there are still plenty of teams that don’t like Joe Mixon and won’t touch him. But when you have 32 NFL teams, it only takes a couple of general managers and owners to fall in love to raise your draft stock.

Mixon is a unique talent, because along with his ability as a running back, he can catch it out of the backfield (65 grabs in 2 seasons), and can be a quality return man as well.

I was firm believer that this would happen all along. Teams would start studying up on Mixon, see the raw talent, and find reasons to think he’s not the person people saw on the video. Whether that’s right or wrong is a story for another day, but considering the NFL is a multi-billion dollar industry with excessive amounts of pressure to win, Joe Mixon gives a team unique abilities that aren’t easy to find (speed, power, pass catching, return man, etc).