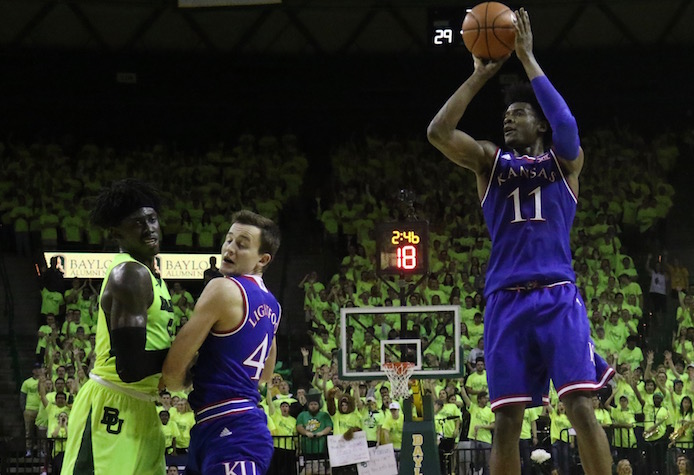 It’s that time of year again. The most exciting, dramatic, fun, and painful time of the year. Kansas just won its’ 13th straight regular season Big 12 title. There are many young Kansas Jayhawks fans that have never experienced a season where Kansas did not win the conference. However, while Kansas and coach Self have dominated in conference play, they haven’t always had the most success in March Madness. Kansas had a solid run last season and lost to the eventual National Champions, the Villanova Wildcats in the Elite Eight. For many schools, going to the Elite Eight and winning the conference is looked at as an incredible year. However, for blue-blood programs like Kansas, a season cannot be considered “great” unless you make it to a Final Four. In Bill Self’s tenure at Kansas, the Jayhawks have only made it the Final Four twice in fourteen seasons. After winning the Big 12 regular season title this year by a wide margin, Self made it clear that this season could not be considered a success without advancing deep into the NCAA tournament. Here are some key questions that I have as Kansas gets set to play in the Round of 64 on Friday night.

Can Kansas win without being a good free throw shooting team?

This, to me, has been a major question facing the Jayhawks all season. Not being able to shoot free throws well in conference play and surviving is one thing, but a bad day at the charity stripe in the NCAA tournament could end the season for the Jayhawks. Kansas has made a living off of beating conference foes in the final minutes of the game. In order to win nail-biting games in this tournament, you have to make key free throws to eliminate the opponents’ chance of extending the game. Coach Self likes to point to the stat that shows the Jayhawks improved at the line in conference play, where they shot .708 during Big 12 play. The issue, though, is that Josh Jackson is the worst free throw shooter on the team and he is the player most capable of getting to the line. So the Kansas Jayhawks will be relying on a freshman to make clutch free throws that he hasn’t consistently made all season.

Who will step up for the Kansas Jayhawks?

The Jayhawks have really only had three players who have consistently played well in order to give Kansas a chance to win. These players have been: Frank Mason, who might be the National Player of the Year. Josh Jackson, who brings a competitive element that most one-and-done players never show at the college level. And Landen Lucus, who has never been a scorer, but he has excelled at playing defense and grabbing rebounds while staying out of foul trouble. Outside of these three, there have been various players who have stepped up depending on the game. Graham has been a solid player alongside Mason, but he will be playing with a hurt foot and he hasn’t had the junior season campaign that many believed he would have, as he is shooting a lower percentage than he shot as a sophomore. In this mix of players with the ability to step up that will need to player big roles in the thin Kansas rotation are Vick, Bragg, and Mykhailiuk. With this seven-man rotation, it is absolutely crucial that the Kansas Jayhawks find consistent play from its’ role players.

Can the Jayhawks continue to win close games?

It seems like every game the Kansas Jayhawks have played in this season has gone down to the wire. Even against opponents that clearly have inferior talent compared to KU, the Jayhawks never seem to blow teams out. This could become a real issue for Kansas. What happens if Kansas isn’t hitting their shots in Tulsa against Miami or Michigan State? I am interested to see if playing in these close games will give them the ability to feel comfortable and find a way to win, or if it will come back to bite the Jayhawks and end their season short of their Final Four goal. There have been so many times this season where it has taken a crazy comeback for Kansas to pull off a win. In March Madness, it is going to be important for the team to get off to a hot start so they do not dig themselves a hole that they may not be able to dig themselves out of.

Overall, I don’t believe that Kansas’ path to the Final Four is impossible. Just like any other team in this tournament, they will have to beat teams that can beat them on any given night. A potential matchup that I would be very excited to watch would be in the Sweet Sixteen. If Iowa State can find a way to survive the first weekend, where they will likely have to beat Purdue, the Jayhawks and Cyclones will have an exciting battle in the Sprint Center to see which team will advance to the Elite Eight. Kansas has been a flawed team all season, but I don’t see a single team in this bracket that Kansas isn’t capable of beating. With two of the most competitive, talented players in the country in Mason and Jackson, Kansas will be a tough draw for any opponent that they face.