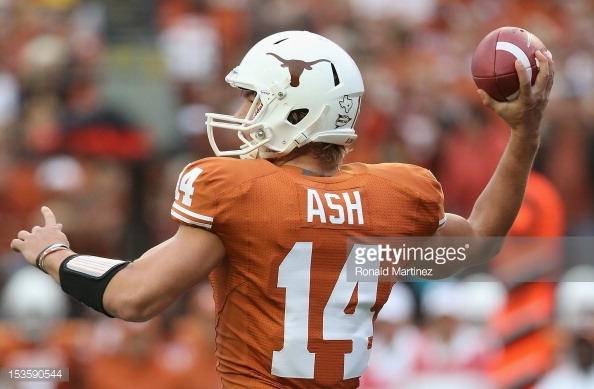 Talk about news coming out of left field. Former Texas Longhorns quarterback David Ash has been medically cleared to restart his football career. Ash retired over two years ago because of concussions.

Ash’s career at UT started in 2011 and ended that season on a high note being named the offensive MVP in the Holiday Bowl. But his history of concussions started in September of 2013 in a loss to BYU. After missing the 3rd game of the year against Ole Miss, Ash returned against Kansas State and threw for 166 yards and 1 touchdown in the first half. But, he then re-aggravated his concussion in the 31–21 victory. That would be it for Ash in the 2013 season, as the 2nd concussion turned out to be worse than the first one.

Then one year later, in September 2014, he suffered another concussion in the season opener. It was following that game in 2014 that Ash struggled with symptoms as a result of multiple concussions and ultimately decided to retire.

The school confirmed Thursday he has been cleared to play and will participate in Texas’ pro day on March 28. At 24 years old, who knows what the end game is here for Ash? Does he want someone in the NFL to take a flyer on him? Canada? I’m not really sure, but I have a hard time believing anyone in the NFL will take him seriously.

At the same time, if he’s medically cleared and still has the desire to play, I respect the hell out of him for giving this a shot.

David Ash had a solid career in Austin, throwing for 4,728 yards and 31 touchdowns and went 15-7 as a starter during his four seasons at Texas.