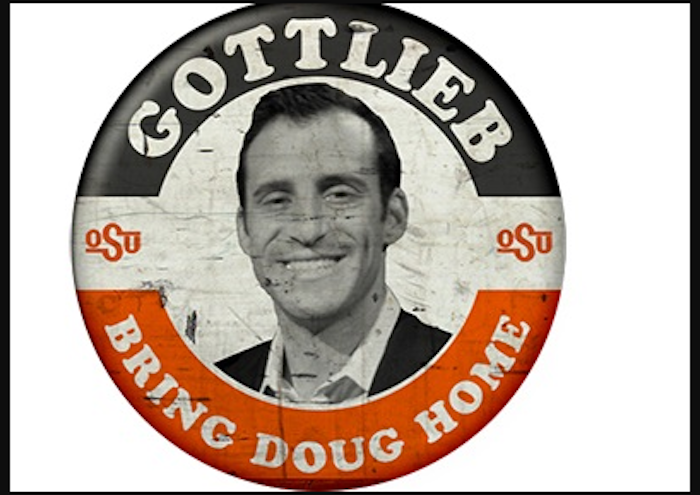 With Brad Underwood shocking Oklahoma State and leaving after one year for Illinois, there should be very little debate on this, it’s time to #BringDougHome. Yes, Doug Gottlieb should be the next coach of the Oklahoma State Cowboys basketball program.

I’ll use a dating analogy to explain what just happened to the Cowboys: your parents and friends told you to date your hometown girl, but you got tied up with the slightly sexier big-city lady, against their wishes. Just when you thought she was “the one”, the big-city girl breaks your heart and dumps you like a bag of rocks. So, when your long shot fails, it’s time to do what you should have done all along, and settle down with your hometown girl.

I first met Doug Gottlieb nearly 4 years ago when I began working as an anchor at CBS Sports Radio. Our discussions were often brief as we’d cross paths after his show as I began my night anchor shift and he was wrapping up his show, which airs from 3-6 PM ET on CBS Sports Radio and CBS Sports Network. Coincidentally, we had some things in common, as I started my radio career in Woodward, Oklahoma, and one of the owners of the radio station I worked for was a friend of Doug’s from Oklahoma State.

Don’t get me wrong, we aren’t friends. But we are colleagues who have spent time talking college hoops, specifically, Oklahoma State, and in general the state of Oklahoma.

What I do know is that Oklahoma State University president Burns Hargis and athletic director Mike Holder will not find anyone who genuinely cares more about being the coach at Oklahoma State than Doug Gottlieb. Just a couple months ago Doug and I spoke in depth about the position of coaching the Cowboys. While I won’t divulge the details, I could tell how badly Doug wanted the job. And just like we all did, he assumed Brad Underwood would be running the show in Stillwater for the foreseeable future. He figured his best chance may have come and gone.

But not only did Doug still yearn for the job, he had complete confidence he could succeed at the job. Plus, spend some time actually talking hoops with Gottlieb, and you know his knowledge is on par with any college coach (at least any coach I’ve covered). I’ll never forget nearly missing an update on CBS Sports Radio because Doug was spending a few minutes giving me a “deep dive” into Villanova’s offense (my alma mater).

The idea that Gottlieb needs to spend some time as a coach at a mid-major or elsewhere to “prove he can do it” is a ridiculous idea. He is not just a TV/radio personality who thinks he can be a head coach.

Basketball is “the family business” as Gottlieb’s brother, Greg, an assistant as Oregon State, writes on his Twitter profile.

Along with his brother, Gottlieb grew up the son of a coach, Doug played the game at a high level, has followed it as closely as anyone over the last 10-15 years, and spent last summer coaching Maccabi USA’s Open Men’s basketball team. His recruiting connections run deep, his staff would have some familiar faces, and his people skills would be no problem.

Gottlieb is 41 years old, but I don’t think you’ll find a guy in his early 40’s who will be able to relate better to college students than the former Oklahoma State guard. He’s smooth, hip, but not in a corny way, very relatable, and if you’ve spent 5 minutes with Doug Gottlieb, you know the man can talk.

This would not be a gimmicky hire by Oklahoma State. It would not be the Jets signing Tim Tebow. This is a hire for the future and stability of this program, something it needs now more than ever.

Yes, the fans want it, but why is that a bad thing? If anything, at a time when the fans feel jilted, and Oklahoma State needs to keep the momentum going from Underwood, why not bring in a fan favorite, who is also more than capable of handling the position?

There’s no BS there. Doug Gottlieb is a straight shooter. But I will disagree with him here: Doug Gottlieb is the perfect candidate. Sure, he doesn’t have the traditional coaching resume you’d want to see from building a mid-major program into a success and pulling off a first-round NCAA Tournament upset. Neither did Fred Hoiberg or Steve Kerr. Both worked out quite well. Know the game and know how to handle, manage and relate to people. Those are the biggest qualifications for the job.

Doug Gottlieb has them.

If you’re still not sure, just check out this video. Then we can all agree, it’s time to #BringDougHome.

Time to get it started again but this time it’s Loyal & True. #BringDougHome pic.twitter.com/fUaIxTHZ1j