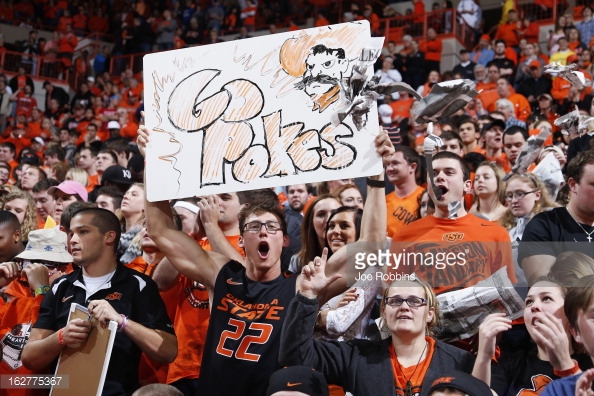 Serious question Oklahoma State basketball fans (or any OU fans that may read this):

If Bob Stoops doesn’t win a National Championship in his second year in Norman is he still the coach there today?

Maybe, but more likely no.

The Sooners were a decade long train wreck when he got there. But he went 7-5 in Year One which was impressive, and the followed it up with the amazing run in 2000 for the title. He’s been nothing but spectacular for them.

But just for the sake of making my point, let’s say his record the first three years were 7-5, 8-4, and 8-4, with no Big 12 Championships. It sounds ludicrous when thinking about the machine Stoops has going on in Norman, but even that level of winning would have been impressive with the state of the program when Bob took it over.

Do you think maybe Florida would’ve called after Steve Spurrier left in 2001? Stoops was Spurrier’s defensive coordinator before leaving for the Sooners, and would’ve been a much more desirable target than who they hired, Ron Zook. His impressive progress turning around Oklahoma and more recent ties to the program than Zook probably would’ve made him the number one target.

In 2001 Florida was in a much better place than my fake OU. The Gators had a 122-27-1 record in 11 years under Spurrier leading up to 2001, versus the Sooners having a 77-59-3 record over the same span under coaches Gary Gibbs, Howard Schnellenberger, John Blake, and my Fantasy Stoops. Add in Florida’s six conference championships and a national championship in that time to the zero of either Pretend Stoops would have and there’s a good chance he bolts.

Maybe without any real ties to OU, and with the Gators rolling along much better that the Sooners in this alternate reality, Stoops takes the job in Gainesville.

OU fans would have been livid in this scenario! Finally their historic program was coming back! They had finally found THE coach! He fit the culture, he said the right things, he was bringing back the winning attitude and making amazing progress! How could he do this to them? THEY LOVED HIM!!!

I’ll tell you why Imaginary Bob Stoops left OU in my alternate reality: after more than a decade of mediocrity, of being relevant in name only it wasn’t a top job anymore. Sure the history is there, the legends, but coaches want two things:

They want to win.

And the want to get paid a lot to do it.

The Oklahoma State basketball program isn’t viewed nationally as we OSU fans view it, not anymore. After a decade or more of being a non-factor nationally or even in our own conference the shine of the Sutton years has dulled. Basketball aficionados know the name Iba, but that was a long long time ago. Can the luster be restored? Absolutely! Get the right coach with the right fit and it’ll be back. Stoops did it to OU’s beaten down football team. Brad Underwood almost did it to the Cowboys.

You what the difference was between Underwood and the real Stoops?

I don’t know if anyone came calling after Stoops’ first year at OU, but if they did it was probably a program without the cache of even a slumbering Oklahoma. And they probably didn’t offer him over-the-moon money.

Underwood won enough to draw attention (his record at SFA helped too), and a team with comparable prestige and a big checkbook came calling. Add in a less that favorable relationship with his boss and a question about how committed the administration is, and there’s trouble.

He wanted to win.

And he wanted to get paid a lot to do it.

He questioned whether or not either of those two things would happen with Oklahoma State basketball, so I don’t blame him for going to the Illini. They told him what he wanted to hear and made him a wealthy man. Congrats to Brad Underwood.

Unlike Stoops’ first two years in Norman, Underwood hadn’t really proven anything yet in Stillwater. He has a worse first year than Travis Ford did, and his team did poorly against the best teams in the conference. There’s no doubt in my mind that Underwood was going to be far and above better than Ford was, but that doesn’t matter now. Right or wrong, Mike Holder was so concerned he WAS another Ford he wanted him to prove a little more before opening the vault. Unfortunately, Illinois believed they had already seen enough.

But had Underwood won his first year even 75% like Stoops did his second year, he’d still be the Oklahoma State basketball head coach. If Underwood strolls into Mike Holder’s office with a shiny new Big 12 Championship Trophy the day after his Sweet 16 loss, he’s still a Cowboy and he’s making his $3 million per year, no questions asked.

But instead we all know what happened. Bye bye Brad.

The sobering fact Cowboys fans is that Oklahoma State basketball is no longer a destination job. Coaches don’t dream of being there. Sure they know the history and they’ll say all the right things, but the reality is unless they win enough fast enough to awaken the echoes and get locked down money wise they are going to take the first better deal from a better job that comes along.

OSU football dealt with that for a long time. Jimmy Johnson. Les Miles. They’d come in, have success, and get snatched up by a place coaches go to retire. It infuriates the fans and the donors and that’s why hires like a nowhere-near-ready offensive coordinator alum like Mike Gundy finally got the gig. Maybe he’ll be good, maybe not, but he won’t leave us for someone else.

They may not admit it, but the fans know deep down that GIA has become one of the places coaches go to prove they can handle a big boy job. We’ve taken a slide down the ladder from destination to stop off.

That’s why the push from the fans to hire Doug Gottlieb is so strong! Maybe he’ll be good, maybe not, but he won’t leave us for someone else. Stoops turned OU back into a destination job in Year Two, and that’s why he’s still there. Had Underwood stayed another year in Stillwater he may have flipped the switches for OSU too.

So now the options are either try to find the next big coach and hope things go well enough early you can keep him forever. Or you take a chance on the guy that will stay until you force him to leave and just hope he doesn’t screw it up.

I don’t envy Mike Holder’s position right now because the next few weeks will most likely decide his future and his legacy at Oklahoma State. He was very close to washing away the Travis Ford mistake with a perfect hire, but he fumbled the Underwood negotiations and actually seemed to make it worse.

Be it Gottlieb or someone else, Holder’s next hire for Oklahoma State basketball absolutely HAS TO work out, both for Holder’s sake and for the sake of the program. All of the great things he’s done for the University will be completely forgotten if he buries our beloved basketball program a third time.