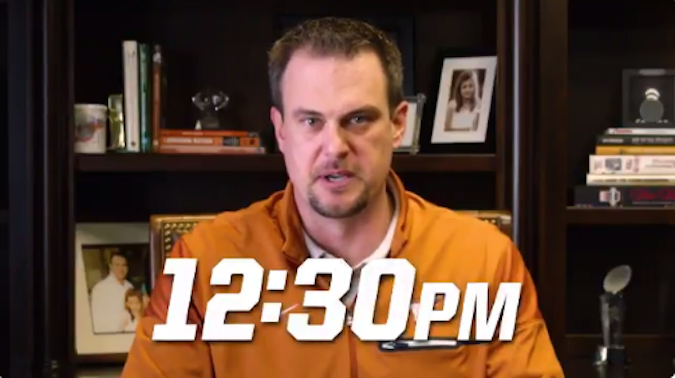 Tom Herman is rapidly becoming the Jim Harbaugh of the Big 12 conference. Quirky, weird, and fascinating. Herman released a video on Twitter to support and promote the first ever Texas Student Appreciation Practice.

First off let me say I think this is a really cool idea. Any time you can bring the students into something that makes them feel like they are VIPs, it’s worth it. And maybe the bizarreness of it all is part of what Herman and the Longhorns were going for? At least I hope that’s the case. It’s kind of like when Lane Kiffin got crushed for his awkward FAU recruiting video, which he later told Colin Cowherd of Fox Sports was all part of the plan to get people to talk about it.

Regardless, could Herman have his hands clenched any tighter to start the video? I don’t know how the guy didn’t pass out from lack of blood circulation based on his firm his hands appear to be gripped to each other.

Then once you get to the details of Texas Student Appreciation Practice, which will include students playing against former Longhorns, the potential really skyrockets. How many kids are going to drink half a case of Bud Light before trying to stop Marquis Goodwin on a go route or before trying to burn Aaron Ross on a slant route? This could be epic. I hope there are Texas students that go to just record video on their phones of this event.

If Tom Herman starts winning big at Texas, some of his antics and his unique personality are going to get more publicity on a national level, a la Harbaugh.

This could be fun.