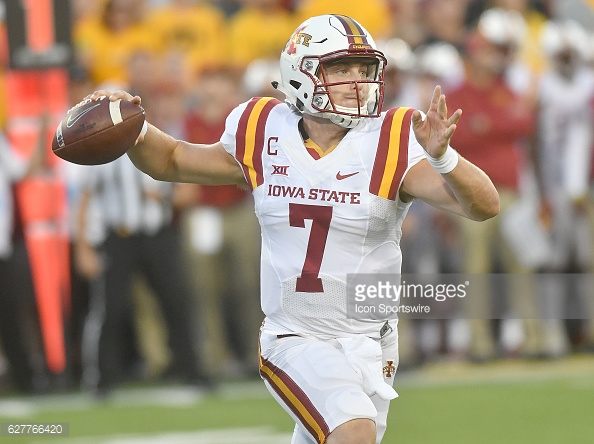 When we interviewed Iowa State head coach Matt Campbell last month, he addressed the team’s plan to find multiple ways to utilize the skills of Joel Lanning, who slowly lost his starting QB job to Jacob Park last season. Campbell told Heartland College Sports, “is it giving a guy like Joel [Lanning], who’s certainly skilled in a multitude of different ways the opportunity to grow and expand his role on our football team. I think we’d be short changing our football team if we didn’t think outside the box a little bit.”

Well, Iowa State is really thinking outside the box, as they’ve started giving Lanning some run at middle linebacker. Iowa State linebackers coach Tyson Veidt said, “He’s the No. 1 mike linebacker for us right now. He’s) doing a great job there running with the ones. It’s certainly his job to lose.”

Who saw this coming? I honestly figured that Lanning would be used in the role he took on last year, similar to an 18-wheeler package of Tyrone Swoopes with Texas. Then I thought the Cyclones might use him in a fullback-style role as well. Never did I think I’d see Joel Lanning as the starting middle linebacker for Iowa State.

We know the Cyclones are light at linebacker, but to think that Lanning is already the front runner for the job is pretty shocking. It’s impressive and a testament to his athletic ability and willingness to give 100% to a brand new position. But it also is a little concerning that he can beat out guys who were actually brought in to play the position at a high level.

At first, I didn’t like this idea one bit. I felt Joel Lanning should continue to put all his efforts onto the quarterback position. As much as Jacob Park progressed last season, he still had room for improvement and looked shaky at times. Plus, I thought Lanning’s 18-wheeler package would be much more effective than Tyrone Swoopes’ at Texas because Lanning actually has the ability to throw the ball out of the formation, whereas Swoopes was very predictable when he came into the game.

But if the Cyclones are really that thin at linebacker that Lanning’s services are desperately needed there, then that’s where Matt Campbell should play him. Iowa State ranked 8th in the Big 12 in total defense in 2016 and the run defense was especially weak, also ranking 8th in the Big 12. With Lanning’s ideal size (6’2”, 235) and athletic ability, this could be a home run for the Cyclones. An added benefit to having Lanning on defense is utilizing his leadership qualities, which are fantastic.

My biggest concern would be burning Lanning out, as he told the Des Moines Register, “Coach Campbell told me, ‘If everything works, you’re probably going to be throwing up after all the games because you’re going to be playing so much.”

If Lanning wins the middle linebacker job, he should not see the offensive side of the ball more than 2-3 times per game, only in must-need, goal-line type situations. If Iowa State is down 3 points in the final 2 minutes against Oklahoma State and driving at mid field facing a big 3rd and 2, I’m all for it. But working him in as part of the regular offensive game plan would be overkill.

If Joel Lanning is Iowa State’s middle linebacker, he needs to do everything he can to stay fresh against spread-em-out, uptempo Big 12 offenses, while also being the potential vocal and emotional leader of that unit.

If the Cyclones used him consistently on both sides of the ball, they would be dealing with diminishing returns. Joel Lanning would likely burn out to the point where his effectiveness would suffer on offense and defense.

So sure, sign me up for seeing Joel Lanning as the starting middle linebacker for the Iowa State Cyclones in 2017. There is a ton of potential there. But if that’s the case, leave him on the bench when the offense takes the field. If they don’t, it could backfire.

Oklahoma Spring Football: Thoughts from Bob Stoops’ press conference
Wichita State to AAC heats up, but what about the Big 12?
To Top