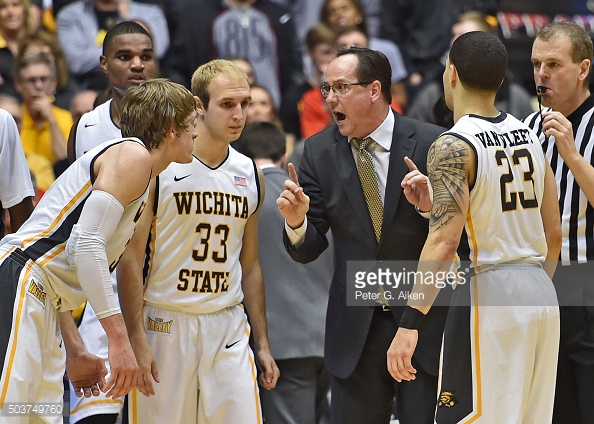 No, I’m not starting any rumors of Wichita State to the Big 12. The Big 12 is not expanding.

But, with the latest reports this week that the noise surrounding Wichita State to the AAC is heating up, I’ve been asked by a couple people why the Big 12 isn’t a landing spot.

Last week Sports Illustrated’s Pete Thamel wrote, “This could happen in as soon as the next few months or may take a year or two. But the odds are increasing that the Shockers will end up somewhere else, with the AAC offering the highest profile and making the most sense.”

First off, Wichita State does make the most sense for the AAC. They would add a quality basketball program to battle with SMU, Cincinnati, UConn and others. Also, there is an imbalance in football vs. basketball schools in the AAC, since Navy doesn’t play hoops in the conference. So getting a 12th basketball school has plenty of appeal to it.

First off, I’m a sucker for geographical alignments and fits. So sure, right off the bat, adding Wichita State, which is near the geographical epicenter of the Big 12 is a nice perk, and its basketball program is top notch. But that’s about all that would make sense.

It would be fun to see Wichita State battle Kansas on Big Monday, but it’s just not that easy or simple.

We’ve seen this story play out in the old Big East, where the conference was basically split between football-centric schools (Miami, Virginia Tech, Notre Dame, etc) and basketball-centric schools (Villanova, Georgetown, and Providence). As a result, the conference powers that be were never on the same page as to what direction the conference should go and the Big East imploded. The Big 12 would never want to start going down that road. And frankly, it’s a risk that the AAC is taking when you start adding programs that are more focused on one sport than the other.

Here is the reality for Wichita State fans who want to potentially see their University make a major move to being in a Power 5 conference. But hear me out, because it’s not going to happen overnight.

Wichita State needs to get itself into the AAC for basketball to help raise the national profile of the program even further, compete night-in, night-out on a higher level, and hopefully get better seeds to make deeper runs in the NCAA Tournament. Then, the University needs to bring back football. This was addressed by Wichita State over the summer in a study that was done by University officials.

The report stated, “It would cost approximately $250,000 just to start the process as an FCS program, while an FBS program would be around $585,000. After five years, those budgets would increase to approximately $6.5 million and $10.5 million, respectively. Those costs are before any stadium construction.”

Here’s the good news, Wichita State has the Koch brothers in its corner. A school in the Missouri Valley Conference is reportedly paying Gregg Marshall $3 million per year. If true, that’s more than Villanova pays Jay Wright. How? The Koch brothers. In addition, the name of the basketball arena is the Charles Koch Arena.

If you aren’t familiar with the duo, they are best known for their donations to the Republican Party, but their money stems from Koch industries, the second-largest privately owned company in the United States (2013 revenues of $115 billion).

If you want big-time football and need some help funding it, put together a proposal to the Koch brothers, and you can probably have them lend a hand. They can be what Phil Knight was to Oregon or T. Boone Pickens to Oklahoma State. In many ways, they already have been, but even at a more productive level.

The current Big 12 TV contract runs through 2024-25. If over the next 7 to 8 years Wichita State can maintain its status as a top-tier hoops program, while bringing back a respectable football program thanks to big-money donors, then they become much more attractive to the Big 12.

Think about it anyway, most of the realignment chatter starts heating up prior to new TV deals being signed. In college sports, 7 to 8 years is a lifetime. Plus, with the rapid speed at which the TV industry is changing, who knows what kind of options will be out there come 2025.

So while Wichita State isn’t going to become a Big 12 member anytime soon, there is hope for the future. But it’s going to take quite a bit of work, and more importantly, quite a bit of money.