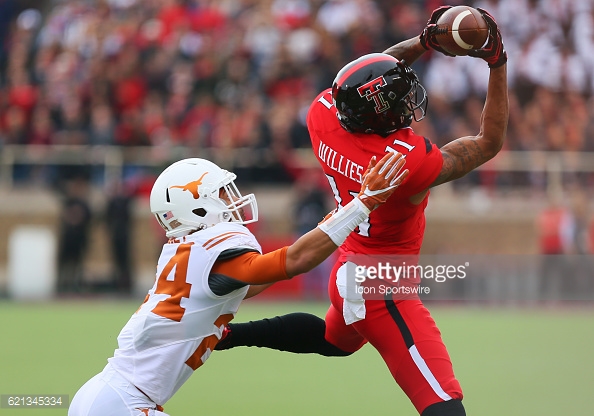 There is no question the seat is starting to warm up a bit for Texas Tech head coach Kliff Kingsbury. Now with Patrick Mahomes off to the NFL, Nic Shimonek is poised to take over as the starting quarterback. But, if the Tech offense is going to produce near the level of the last two seasons, Derrick Willies needs to be the wide receiver many expected when he arrived in Lubbock last year.

Willies came to Texas Tech with high expectations. He came by way of Trinity Valley Community College, which was preceded by a stint at Iowa. The 4-star recruit, who was the #1 JUCO prospect in the country, joined the Red Raiders prior to last season and was expected to be one of, if not the top target, for star quarterback Patrick Mahomes.

Unfortunately, that never transpired as Willies played in just 8 games in 2016, with 18 catches for 288 yards and a measly two touchdowns. But injuries were a big reason for his struggles. Derrick Willies suffered two broken hands, torn ligaments in an ankle, a sprained MCL and then, after the season, underwent surgery for a ruptured appendix.

With spring ball underway, Willies is reportedly back to full health, and that’s a huge bonus for the Red Raiders.

Here’s the thing about Texas Tech in 2017: we know the defense has to start to show improvement, ASAP. But if you think Tech is going to go from the worst defense in the Big 12 to one of the best, you’re sorely mistaken.

In 2016, Tech allowed 554 total yards per game, which is 98 more yards per game than the second-worst defensive team in the conference (Kansas, 456 YPG). So a best case scenario is the Red Raiders cut that number drastically, but are still 8th or 9th in total defense in the Big 12.

So with the realistic expectations being that the Texas Tech defense will still struggle, but hopefully not as badly, the offense is going to need to keep its pace from the Mahomes era. It’s certainly doable, as Kingsbury’s system will allow Nic Shimonek to shine. While Shimonek isn’t Mahomes, if he can get some more help from his teammates that Mahomes got at times, that can make up the difference.

That starts with Derrick Willies. The 6’3”, 215-pound target has to be the most reliable of a deep wide receivers group for Kingsbury and Shimonek.

The Red Raiders have a plethora of quality and experienced guys at wide out, but none are that big-bodied true #1 receiver on the outside. Tech has Jonathan Giles and Cameron Batson in the slot, while Keke Coutee, coming off a breakout season (2nd in Big 12 play with 95 YPG), will play the other inside spot. Dylan Cantrell is a solid player on the outside that can hopefully give balance with Willies, along with sophomore T.J. Vasher.

But if Willies can be the guy that defenses start to focus on in the passing game and draw double coverage over the top, then that will make Shimonek’s life much easier as he heads into 2017 as the starting quarterback.

So, is it really fair to put even more pressure on the Texas Tech wide receivers to produce? No, it’s not. But that’s how things have to be right now in Lubbock for the Red Raiders to have a chance to turn things around.