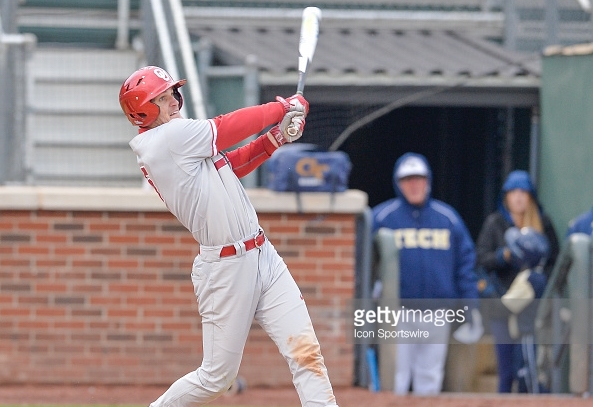 Six teams started Big 12 play two weeks ago, while three more kicked off Big 12 play this past weekend. As a result, there was more movement and surprises in this week’s Big 12 baseball power rankings!

These guys are on a roll. Texas Tech is on an eight-game winning streak and stays atop the Big 12 baseball power rankings. They’ve scored at least four runs in five of those eight victories. The pitching staff has limited opponents to one run in half of the games on the winning streak. Hunter Hargrove racked up multiple hits in each of their three road victories against Wichita State this weekend. Tech will likely extend the winning streak to double digits with two midweek home games against Texas Southern. Afterwards, they’ll head to Norman for a series that has early regular season title implications.

This team was not pretty at all against Oklahoma State, but they still found a way to sweep the Cowboys at home. They need late inning comebacks in each of the first two games. Each of the two teams committed four errors in the first two games. Right now, TCU is relying on its talent pool to squeak by. Once Jim Schlossnagle shores up that defense, this team will be the best in the nation. Currently, the Big 12 schedule is allowing for the growing pains to take place. Next up is Kansas State, then a break from conference play, then a road series against West Virginia. Flip the schedule around and there is no way TCU has a winning conference record right now.

It’s uncertain just how good this Oklahoma team is, but one thing is for certain: they’re a solid team and keep rising up the Big 12 baseball power rankings. They finish their first road trip with a 6-3 record, including taking their opening conference series from what is perceived to be a good Baylor team. When the Sooner offense is hot, they can be scorching. Oklahoma outscored Baylor 14-3 in its two victories. They still managed to rack up eight hits during a 7-0 loss. The Bears also could not muster up more than two runs in any inning. Pitchers beware: Steele Walker (.573 average), Blake Brewster (.614) and Kyle Mendenhall (.457) have four home runs each. Consider the No.1 spot on the line this weekend when the Sooners host Tech.

West Virginia loves to play at home. They finally got to play in their friendly confines this weekend. Perhaps, the most excited player was Jackson senior first baseman Jackson Cramer, who blasted two homers during the team’s two victories. One of them was a walk-off homer.

“We’ve played on the road so much that we never get the last at-bat,” WVU coach Randy Mazey said. “I told the guys going into today that the last at-bat means the world, and we never got to do that. I think this will give us confidence at home. If we get in that situation again, down by two in the ninth, our guys know that we can win at any time.”

Unfortunately, for West Virginia, Big 12 scheduling has set them up in Stillwater this weekend. This series will strengthen one team’s regional hopes. The other team is going to be squarely on the bubble.

It was bounce back weekend for Texas. Facing a nationally ranked school before a team dwelling at the bottom of the power rankings usually does that for you. The Longhorns swept Kansas State with two shutout victories and 6-5 comeback on Sunday. Morgan Cooper was dominant Saturday. He tossed eight shutout innings, racking up 11 strikeouts. Cooper surrendered just four walks and two hits. Friday starter Nolan Kingman helped save the bullpen with a complete game shutout himself. Texas would make up plenty of lost ground if it can sweep Kansas on the road this weekend.

We’re being kind to Baylor this week by keeping them in the No.6 spot. If Oklahoma State had just taken one victory from TCU, Baylor would have dropped without a doubt. Right now, these Bears are clearly dwindling. After playing stellar in non-conference play, Baylor has dropped two home series. Neither of which came against national title contenders TCU or Texas Tech. Hopefully, the Bears can find some confidence with a road series against Washington this weekend. If they are unable to, it will be a long April. The next three weekends are: at Texas Tech, vs. Texas, at TCU. Baylor fans, try to refrain from hitting that panic button just yet.

Pistol Pete sure seemed like a villain in an epic movie this weekend. Twice, the Cowboys held national power TCU on the ropes in Fort Worth. Twice, the Horned Frogs stormed back in the late innings to break the hearts of Oklahoma State fans. Saturday just so happened to be Superhero Night at Lupton Stadium. Five errors will kill you, and it allowed the Horned Frogs to sweep the Cowboys this weekend. Now, Josh Holliday has the toughest job of any skipper in the Big 12. He has to make his team focus on what lies ahead, rather than thinking about what could have been. This team should be No.2 this weekend with a road series victory against a national contender. For this week, it will have to be a bottom dweller. On the bright side, Oklahoma State has a favorable upcoming schedule to work its way out of the gutter.

The Wildcats let an opportunity slip away Sunday when Kody Clemens blasted what would end up being a game-winning home run to secure Texas a sweep of the Wildcats. Kansas State could very well be 0-12 entering a home series against West Virginia. They host TCU this weekend. Luckily, the Horned Frogs are vulnerable right now and haven’t quite found their defense. Currently, there are only two regulars in the lineup who are averaging above .300. In college, there are players who hit .400. Don’t believe me? Re-read what I wrote about Oklahoma. The bubble for Kansas State might burst before we get to May.

Basketball season is over. Kansas is the sole team in the conference with a record below .500. Matt McLaughlin is the lone Jayhawk, who is a regular in the lineup, to be hitting over .300. There are three positive things that took place for Kansas this year. 1) 13 consecutive Big 12 basketball titles. 2) Beating Texas in football. 3) Somehow, someway scoring a road victory against TCU in baseball. Congratulations, Kansas! I’m looking forward to seeing David Beaty at Big 12 Media Days again in July. R.I.P. Kansas 2017 baseball season.