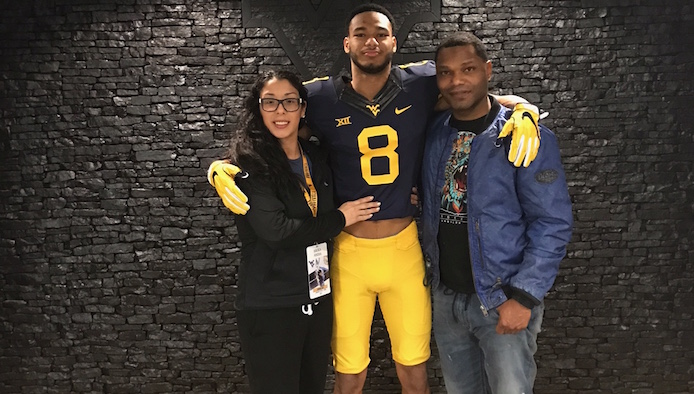 The three-star recruit from Lansdale, Pennsylvania was taught the game at 5 years old by his father, Rick, who grew up all of 10 miles down the road in Upper Dublin, PA, and played football himself. Rick was a star player for the Cardinals, but had Ricky a year after high school and was never able to pursue his dreams.

But Rick put much of his efforts into his son (who has two sisters), and Ricky wouldn’t have it any other way, telling Heartland College Sports, “My dad pretty much taught me everything he knew about the game.” Johns added, “he was never my actual coach, though. But sometimes my coaches would tell me just to listen to my dad from the sidelines since he knew what he was talking about.”

Johns said never felt like his father was living through him, but simply just trying to make his son the best player he could be, and Ricky never felt more pressure. “Our relationship really developed into something special, especially for him to see me accomplish so much. The amount of love we both have for the game and each other gets emotional at times,” Johns admitted.

At 6-foot-4, 180 pounds, the two-way prospect from North Penn is slated to play in the secondary for the Mountaineers, though he had plenty of success at wide receiver in high school. In his junior year, Johns caught 48 passes for 949 yards and 11 touchdowns. Then he racked up 72 catches for 1350 yards his senior season.

As of right now, don’t expect to see Ricky Johns at wide receiver at the next level. He’s expect to put all his focus on the defensive side of the ball. But Johns wasn’t always patrolling the secondary during his high school days, where he spent time as a hybrid linebacker/safety. The three-star recruit said WVU defensive assistant Mark Scott, “noticed my versatility and ability to get in my zone drops so well and being able to man up on slot receivers, along with being a good tackler.” So safety it is for Ricky Johns.

Besides football, Johns is standout hoops player, while also excelling at track, where he was top 3 in the district in the 100M, 400M, high jump and long jump.

However, Johns’ secret weapon comes off the field, where he is bilingual. Johns mother is Peruvian, so he is fluent in Spanish. The biggest perk? “Probably getting an easy ‘A’ in spanish class [laughs], or being able to have a private conversation in public with my mom,” Johns joked.

Ricky Johns will be reporting to camp in Morgantown in the beginning of June and has been lifting, along with running track, to prepare for the next level.

He can’t wait to join the Mountaineers, who he chose over offers from Temple, Towson, Marshall and Villanova. Johns told Heartland College Sports, “West Virginia was the first school to offer me, which means a lot since they were first to realize how much talent I have. I had to go with WVU. They beat out every other school in terms of competition, facilities, and coaching. I really can’t wait to get that first game experience in Morgantown.”

Because we all know, nothing beats 60,000+ West Virginia fans and players serenading each other to Country Roads after a big win.