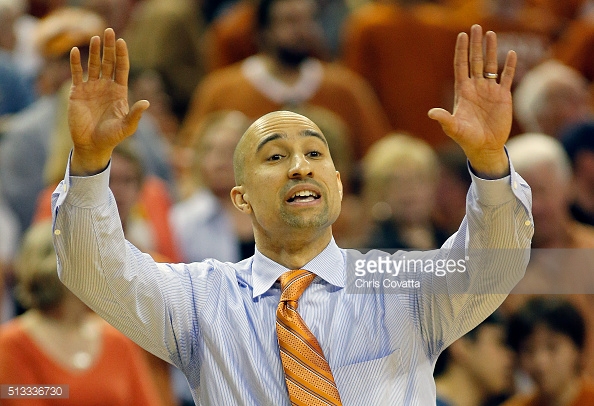 According to a report from Gary Parrish at CBS Sports, Texas head college basketball coach Shaka Smart and Notre Dame’s Mike Brey turned down Georgetown’s offer of an interview.

Georgetown thought Smart might be a fit since he made a name for himself at VCU (Virginia Commonwealth), which is just over 100 miles away from the Georgetown campus. Smart made his name at VCU where he became the head coach in 2009, replacing Anthony Grant, who left to become the head coach of the Alabama Crimson Tide.

That and his presumed ability to handle the John Thompson Jr. dynamic around the program made the Big East school interested in Smart, a source told CBS Sports. But the source added that Smart has no interest in leaving Texas and the top-10 recruiting class he’s about to enroll in Austin.

CBS Sports Radio’s Doug Gottlieb, who just lost out on the Oklahoma State opening also made this point:

Shaka not doing great in-state recruiting – might not be a great FIT at UT http://t.co/j2Bcarj9Ff

But Smart’s upcoming recruiting class is impressive as well. The Texas Longhorns head coach has picked up 4 of his 7 recruits from 2015 and 2016 within the state of Texas. While two of his four recruits committed for 2017 are from the Lone Star State, but Gottlieb’s point is more that he has not landed some of the top-talent in Texas the past two seasons.

However, this upcoming class is finally loaded for Shaka Smart, with a top-10 recruiting class including three four-star talents in Jase Febres, Royce Hamm and Jericho Sims. He’s also in the running for big man Mo Bamba. Plus, UT has talent coming back with point guard Andrew Jones and others.

While Texas struggled last season to an 11-22 record, while going 4-14 in the Big 12 and missing the NCAA Tournament, Smart has $18 million reasons to stay in Austin, as in the amount of money he’s still owed. But, Gary Parrish also reports that money is no factor to Georgetown.

It’ll be interesting to watch this one unfold at Georgetown, but I was surprised to see them even inquire into guys like Smart and Brey. But hey, you miss 100% of the shots you don’t take, right?