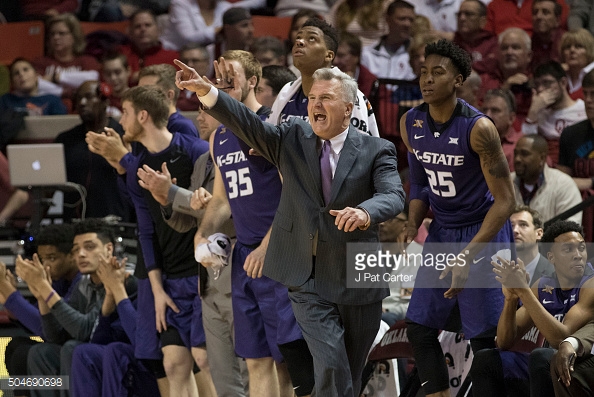 A large part of Wildcat nation will spend this weekend watching the college basketball season come to an end as angry fans, and that’s ok. I understand why they are angry, and don’t fault them for feeling that the basketball program is stymied in mediocrity. I would love to be watching the Wildcats play in Phoenix this weekend, but we’re not. Acting athletic director Laird Veatch told Joel Jellison of the Manhattan Mercury earlier this week that head coach Bruce Weber will return next season, so that’s that.

What concerns me the most is that fact that we are losing two great players in Wesley Iwundu and DJ Johnson, and bringing in a recruiting class that, while it may turn out to good, definitely doesn’t jump off the page at you. The class includes three 3-star recruits, and not one of them had an offer from a power five conference school other than Kansas State. So it appears we are destined for another Selection Sunday wondering if we are in, instead of where we are seeded.

People have said all sorts of crazy things over the last couple of days, the funniest is people wondering if there’s a chance Dana Altman or Frank Martin could be lured back to Kansas State? Come on people, we all know the answer to that question.

So I got to thinking about those two and how they both left Kansas State unceremoniously, and why Wildcats fans are so enamored with them.

Let’s start with the most recent of the two, Frank Martin. I must admit that I am begrudgingly happy for him, but unlike some I don’t think he’s innocent in what by many accounts was a frayed relationship with former athletic director John Currie.

First of all, these are grown men who should have found a way to work together towards a common goal. I just can’t believe that if Coach Martin really wanted to be here that he could not have found some common ground, got other people involved in the conversation, and made it work. We have all had bosses that we could not get along with, but if your passionate about what your doing and where your doing it, then you come together.

It seems as though he has found that in South Carolina, which is why he is not coming back. But don’t think for one second that he has not had disagreements with Athletic Director Ray Tanner. Tanner suspended Martin for the season finale in 2014 for exactly the same thing that turned some K-State fans off, abusive vulgar language towards players with thousands of fans (including children) and cameras watching him. Ironically, that’s also what so many people love about him.

On the other hand, Coach Martin did have a solid 117-54 record, and had taken the team to the NCAA tournament four of his five season. So while Currie did seven of the eight things currently listed in the Kansas State Athletic Director job posting on indeed very well, he kind of failed at the first one: “Lead and manage and administrative team and coaching staff, including the recruitment and hiring of qualified personnel, evaluation of staff and coaching performance, and professional development.”

As the leader of the athletic department, it ultimately falls on his shoulders to find a way to have a good working relationship with a coach that was doing very well. If you ask most college basketball fans what they want from their team, and most will say the same thing: NCAA tournament bids and to win a game or two in each Big Dance. That and beat your rival, which sadly, Coach Martin was only 2-9 against that team down the road.

Then there’s Oregon head coach Dana Altman. This one is a lot harder to figure out. First off, in the interest of full disclosure, I did not move to the Manhattan area until late 1995 and did not attend my first Wildcat basketball game until 2001. So I jumped on this train while it was way down in the valley.

In Altman’s four years, he had two NIT berths to go along with one NCAA Tournament appearance, losing in the first round. Like I said, I didn’t know much about him and had never seen him coach a game until last weekend. While seeing him beat Self and the jailbirds, I mean chickenhaws, I mean whatever they are called, was awesome to see, it didn’t make me say to myself “this is the guy that can take us to next level.” Altman was 68-54 during his tenure at Kansas State, a winning percentage that is a little lower than Bruce Weber’s 100-68 mark.

Looking at it through today’s glasses, his move from Kansas State to Creighton seems like a lateral move, at best. Frankly, I believe it’s a step backwards because of the tradition at K-State. It’s not like Altman was taking over a powerhouse. Creighton had not been to the NCAA tournament in the previous three seasons before his arrival. He did eventually have success there though, winning two conference championships and winning their conference tournament six times between 1999 and 2007.

Then there was the Arkansas incident. In April of 2007, Altman announced that he was leaving Creighton to take over as head coach of Arkansas, only to change his mind the next day and say he was staying at Creighton. You can’t make up stuff that funny.

Unfortunately for him and Creighton, Altman would not lead them back to the NCAA tournament again. After two NIT births in 2008 and 2009 he finished his last season in Omaha with an 18-16 record before leaving for Oregon.

While Altman has taken Oregon the NCAA tournament five years in a row, he is also playing in Phil Knight’s sandbox. And I’m sorry, but having success at Oregon with everything that he has at his disposal to get elite players does not translate to success in Manhattan, Kansas.

While it’s easy to sit and think about how green the grass could be, in the end, Bruce Weber is and it appears as though will continue to be our coach. All we can do is hope for the best, because if we bail on our team, then we are the ones who lose.

If we don’t support the team next season and it doesn’t go well, how many high-caliber coaches are going to be fighting for a job at a school 88 miles from Allen Fieldhouse with a fan base that is disconnected?

We have to stop looking back and focus on the future. We all want better, so let’s act better. Let’s show the world what it means to be Kansas State Wildcats, not Gamecocks or Ducks!