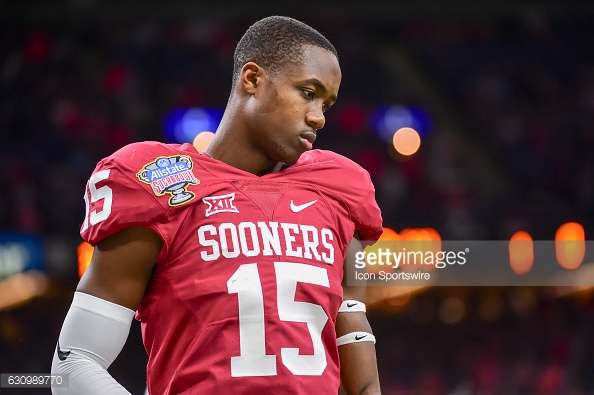 With spring practice under way in Norman and a lot of questions left to be answered for the Sooners’ 2017 campaign, Heartland College Sports spoke with senior wide receiver Jeffery Mead for an interview. The Sooners wide out gave us some context of not only what is going on during spring ball, but a little into the life of being a student athlete.

Jeffery Mead is a finance major at the University of Oklahoma, and is on pace to get his degree in December, an impressive feat for a busy student athlete. The balancing act of school, family time and football can, at times, be very challenging for these young athletes. As Mead pointed out, as you get older it only gets harder, saying, “Ultimately it comes down to your work ethic, nothing is going to be handed to you. Athletes aren’t dumb, but it is a challenge to fulfill our obligations at times, and as you get older it doesn’t get easier, it gets harder. I spend about 3 ½ hours studying each day. If you put in an A effort, you will be an A student, but you also have to manage your time wisely”

Jeffery Mead is preparing for life after football, with a plan to make his living in commercial real estate. Mead would like to start out as a leasing agent so he can gain all the behind the scenes knowledge of the field, before buying, and leasing his own properties. It’s easy to forget at times that these are athletes working to become members of society, and it’s not all about the football field.

Spring practice is different as a senior. The practices are a lot more about the new faces, and helping them learn the ropes, “It’s almost like I am a coach out there at times, out there working with the new guys with coach Simmons trying to help mentor them. Overall, spring practice is going pretty well,” Mead admitted.

Though many have pegged Mead as having a chance to be the next great Sooner receiver, he isn’t fazed by the high expectations, saying “I don’t feel that kind of pressure. It’s a mixed bag since some expect me to do great, while others don’t think of me in that light, I still have plenty of doubters.”

Of course, the Sooners have had great wide receiver play by seniors recently, with Sterling Shepard in 2015, and of course Biletnikoff winner Dede Westbrook in 2016. Jeffery Mead insists he isn’t affected by those expectations, saying, “We don’t really know if there is going to be one guy who really stands out or if we’re just going to be a solid corps of receivers who are all capable of making plays. We very well could see the production spread out this year more than in the past. It’s tough to tell right now if there is going to be a break out-guy. The talent is pretty level across the board, from myself to Mark [Andrews], to Jordan [Smallwood], Nick [Basquine], A.D. [Miller] and others. No one person is necessarily far ahead of any other at this point.”

With the receivers being such a question mark for the Sooners, Mead has a message for the doubters, saying,“ I am not going to sit here and try to persuade anyone. Anything can happen in a football season, but if I had to put $100,000 on it, I’d say well end up as a top-3 wide out unit in the Big 12.  It helps having a guy like Baker who is a two-time Heisman finalist to catch passes from. Who else has that?”

Baker Mayfield has finished in the top-five of Heisman voting each of the last two seasons, and is one of the early favorites to land the trophy next season, after shattering the NCAA record for single-season passing efficiency (a stat he holds the career record in as well). “Playing with Baker, man, it’s interesting. He keeps you on your toes. At first, I didn’t know how I felt about him, because he is just always on you. He likes to mess with people, that’s just him. He likes to act like he doesn’t like you, even though you know better. These days I get him back some, so he can be mad at me for a change, we have a love-hate relationship”, Mead chuckles.

Lastly, for Sooner fans out there who are concerned about the running back position, Jeffery Mead has a ton of confidence in sophomores Abdul Adams and Rodney Anderson, declaring, “Rodney is a beast he looks great. Its crazy man, he is much heavier than me but also a step or two faster, he just does everything well. To those who doubt him, they’ll be in for a big surprise next year. Abdul is a great guy, who just wants to do everything right, as a freshman, at times, he was a little nervous and tight. After a year under his belt, he has really relaxed a lot, and that’s helped him quite a bit. He’s also healthy, which is huge.”

So for all the question marks that some outsiders are having regarding the Sooners this fall, Jeffery Mead’s message is clear: Don’t worry and trust the process!