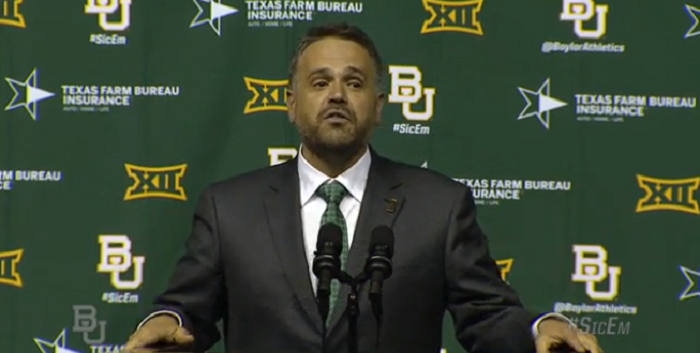 But, the lack of depth on the offensive line, be it scholarship or non-scholarship players, has a trickle-down effect to other parts of the team. “But to really practice the way we want to practice you have to have 2 or 3 offensive lines and we have 1 and three quarters right now. And it’s harder for the defense to get better when they don’t have anyone to go against, so it’s a battle, but it is what it is right now,” Rhule admitted.

The good news is there are some guys on the offensive line that are impressing the head coach.

Rhule said on Saturday he’s impressed by Tanner Thrift, the rising senior offensive lineman, who primarily was a back up guard next season. Thrift is expected to replace star center Kyle Fuller, who was first-team All Big 12 last season.

As for the rest of the unit, Rhule added, “I’ve been really pleased with Mo Porter. Of anybody, his development has been at a really, really high level. I think there are a lot of guys doing a nice job, Daniel Russell and Dalton Justice as well. Overall, I’ve been pleased with the offensive line, it’s just sort of a war of attrition right now.”

There will be more bodies coming in over the summer to help the Baylor offensive line, but for now it’s going to be a numbers game to get this unit through spring camp.

Rhule seems to have a very solid approach as he tries to keep the Baylor offensive line fresh enough to improve itself, while also using them to help the rest of the team, such as the defensive line, improve. This is one of the issues Rhule knew he would have to deal with after last year’s recruiting class was ripped apart.