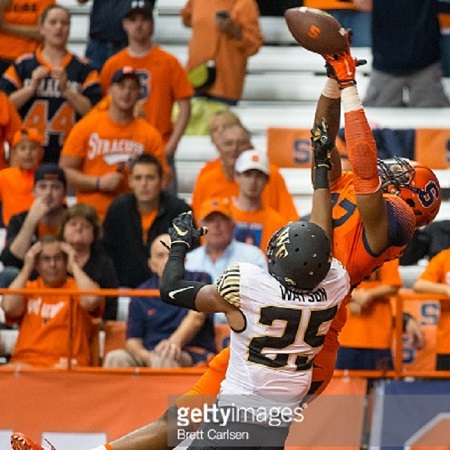 Former Syracuse tight end Kendall Moore announced on Instagram on Sunday he will play his final season of football at the University of Texas.

As a graduate transfer, Kendall Moore will be eligible to play in 2017.

Moore had a quiet 2016 season, catching just one pass for 15 yards while splitting time with Cam MacPherson. For his career, Moore picked up 15 catches with the Orange for 150 yards in 37 games played. His career highlight at Syracuse was his game-winning touchdown catch in overtime from punter Riley Dixon on a fake field goal to defeat Villanova in the 2014 season opener.

At 6’5”, 245 pounds, he played at Syracuse from 2013-16. But after playing in just 3 games in the 2015 season before getting injured, Kendall Moore gained eligibility for a fifth season after receiving a medical hardship waiver from the NCAA for that season.

The addition of Moore gives Tom Herman’s program some much-needed depth at the position. The tight end position was not utilized nearly as much under Charlie Strong as it is expected to be with Herman. Andrew Beck has been dealing with a foot injury this spring, but only had 4 catches last season, spending most of his time as a blocker. Meanwhile, Peyton Aucoin and Garrett Gray have yet to rack up a single catch at the college level.

One of the pieces that was supposed to help was true freshman Reese Leitao, but it’s not clear what his role with UT will be, if any, after being arrested in February for possession and delivery of a controlled and dangerous substance with intent to sell within one thousand feet of a school.