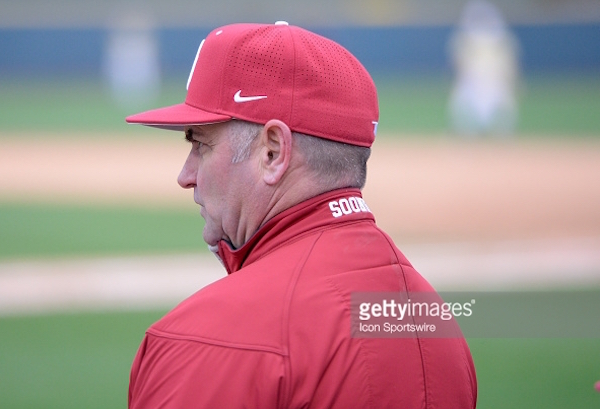 Once again, we have a new top dog in the Big 12 baseball power rankings. There’s also a new team at the bottom of the Big 12 baseball power rankings. That’s right Kansas fans. Your Jayhawks now sport a .500 record in conference play, which moved the Jayhawks out of the cellar. Meanwhile, Texas fans can rejoice that the Longhorns will not play Kansas again until the Big 12 Tournament. Another oddity which took place this week sees the team who is at the top of the Big 12 standings dropping down. Right now, the Big 12 regular season title features a four-team race. Who are those four? Why are they the four? Read below and find out the answers to those questions.

Kyle Mendenhall blasted a walk-off home run to score the series victory for the Sooners to unseat previous top dog Texas Tech. The Sooners have a winning road record. They took a road conference series from Baylor, now add a series victory over a top five nationally ranked team. Oklahoma has officially thrown its hat into the ring of contenders and takes the top spot in our Big 12 baseball power rankings. They’re not completely off the hook though. The Sooners got a break during the Friday game when Texas Tech was forced to use a spot starter. Oklahoma took full advantage of this, but what really helped the Sooners take the series was a Texas Tech error on Sunday which allowed Oklahoma to tie up the rubber match. Both teams had their opportunities to score the series victory and the Sooners capitalized on theirs, thus solidifying their series victory.

Here it is…#YardWork
A #TreMENDous walk-off provided by @kmendy25 to win the series over No. 2 Texas Tech! pic.twitter.com/kpZAmjyZMx

This team should have scored a road series victory this weekend against Oklahoma. Instead, an error sent Ol’ Mo to the crimson and cream and allowed the walk-off home run. Red Raider fans can complain all they want about Davis Martin missing his Friday start, but the fact is Tech missed its opportunity Sunday. The best teams do not let opportunities slip away, hence the drop to No. 2 in this week’s Big 12 baseball power rankings. Oklahoma proved it was the better team Sunday by cashing in on opportunity when it mattered most. Despite the series loss, Tech drops just one spot this week. The team is still solid. It could have easily taken the series on the road against a solid Oklahoma team. Generally speaking, winning one game on the road is about what is expected. Minimal damage has taken place, and this team is still very much in the running for a national seed.

Right now, TCU is at the top of the Big 12 standings. They are coming off a road sweep and have won six-consecutive Big 12 Conference contests. It seems they have shored up their defense. TCU held Kansas State scoreless for the first 24 innings of the series.

From the paragraph above, you would think this team was the No.1 team in Big 12 baseball power rankings. Before the season, this was the unanimous No.1 team in the national polls. Here’s why they dropped this week: they have played the three teams located at the bottom of these rankings. They lost to one of those teams at home. Kansas State’s pitching staff stifled the TCU offense for the first nine innings in each of the first two games. Oklahoma State had several chances to take the series against TCU in Fort Worth the previous week. This TCU team would not be at the top of the standings if they played the big dogs. Right now, Tech and Oklahoma would sweep TCU with ease. It would not surprise me if West Virginia swept them in Fort Worth either. This team is not playing anywhere near its potential, and they really need to send the Big 12 scheduling committee a thank you gift for giving them the bottom-feeders to start conference play. If this team doesn’t use their upcoming weekend series against Murray State to find its identity, West Virginia is going to humiliate them. You heard it first here.

SEE YA!! Cam Warner launches a grand slam off the scoreboard in right and TCU now has an 11-2 lead! #GoFrogs pic.twitter.com/a6sauwDDlF

West Virginia loves the late inning heroics. Cole Austin blasted a two-run shot in the ninth inning Saturday to tie up Oklahoma State and eventually send the ball game into extra innings. The Mountaineers would win the game, and the momentum propelled them to a series victory Sunday.

The nomads are 4-2 after opening Big 12 play with two series on the road. West Virginia is officially the dark horse for the Big 12 regular season title. During non-conference play, the Mountaineers were highly inconsistent. They have basically ended any chance of Baylor and Oklahoma State competing for the regular season title and now find themselves in a great spot. Also, the winning road record sets them up well when their resume is placed in front of the selection committee. This team has only played three road games.

Looking ahead, the nomads actually get to settle down at their home park. Eight of their next nine games are at Monongalia County Ballpark, including their next two conference series. A home series against Kansas sets the Mountaineers up well to gain confidence against a talented TCU team whose performance has been hideous during its first nine conference games. Afterwards, they travel to Kansas State. If West Virginia wins its next three series, they’ll be 10-5, at worst-case scenario, heading into a home series against Oklahoma. This team could make the title race very interesting and continue to rise in our Big 12 baseball power rankings.

Texas fans can breathe a sigh of relief that the road trips to Lawrence are over with. It’s been a rough year for Longhorns fans when it comes to the blue chickens. Texas finishes this school year 1-5 against Kansas this season in the three major male sports: baseball, basketball and football.

Despite the fact it did drop a series to Kansas, it came on the road and Texas is ahead of schedule in terms of transitioning under a new coach. There is still a lot to like about this team, but this proves there is a major gap between the top four and the bottom five.

Baylor has now dropped three consecutive weekend series. This weekend, Baylor dropped a road series to a fairly decent Washington team. We don’t penalize Baylor too much this week, as the bottom three are currently atrocious. However, the Bears have no choice but to break out of their slump the next three weekends, if they want to keep their regional hopes alive. First, they travel to Texas Tech. Then, they host Texas. Afterwards, they travel to TCU. The Bears need to win at least one of those series to help make up for their awful start to Big 12 play.

Oklahoma State is a young team going through growing pains. They have competed with two of the top four teams in the power rankings. The Cowboys could very well be in the thick of the Big 12 Conference race. However, their failure to finish games has placed the team in the bottom three. The Pokes only have five seniors, but need to learn how to finish soon, or they may see their regional chances slip away. Luckily for the Cowboys, they get Kansas State at home this upcoming weekend. One of the bottom dwellers is going to start digging itself out of the hole it is currently in. The other might as well be six feet under.

The Jayhawks actually won a series. By doing so, they are currently in fifth place in the Big 12. This writer was as surprised as he would be if he actually saw a blue chicken. The Jayhawks have had an excellent year against Texas on the men’s side. Unfortunately, they can’t play Texas again until the Big 12 Tournament. But hey, Kansas is no longer at the bottom of the Big 12 baseball power rankings. Progress!

When you are the lone team in the conference without a victory, you have earned No. 9 spot in this week’s Big 12 baseball power rankings. Kansas State could have easily won the series over preseason unanimous No.1 TCU. Twice, the pitching staff did a stellar job in keeping the Horned Frogs off the board for nine innings. Twice, Kansas State’s offense could not produce a single run against what has been an atrocious TCU defense in 10 innings. At one point this week, Kansas State was held scoreless for 27 consecutive innings. Perhaps, some of the Kansas State hitters should consult with Jobu over rum and cigars.