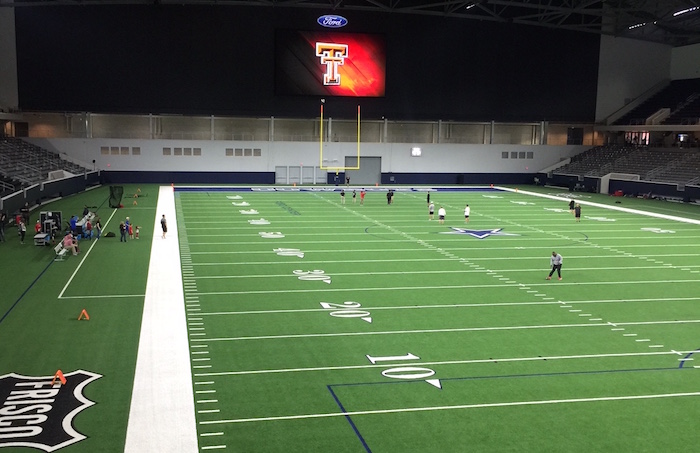 Frisco, TX – The Texas Tech Red Raiders made the 5 hour drive Saturday to the Ford Center in Frisco, Texas, otherwise known as “The little house that Jerry built.” Even though they were far from Lubbock, the 12,000 seat indoor palace felt quite like home for the Texas Tech spring game. The game was sold out in advance, although there were some empty seats throughout the arena (I think some tailgaters never quite made it inside the stadium). Overall Head Coach Kliff Kingsbury was blown away by the turnout as well as being in awe of the new Dallas Cowboys practice facility saying “It’s one of the best facilities that I’ve ever seen. Those high school kids who get to play in here are going to be disappointed when they go to college.” At the end of the day the red team (offense) beat the black team (defense) 49-31 as we saw plenty of action throughout the game. Whether you saw the glass half full or half empty for this team, here are the five things we learned from the spring game on Saturday.

Shimonek put on a show Saturday, finishing the day finishing with 273 passing yards and 3 touchdowns, as well as completing nearly 80 % of his passes. It is hard enough completing 80% of your passes playing catch but to do that in a game type setting? That’s impressive in my book. What I was most surprised about was his poise. He was never in panic mode even with defenders in his face. He stayed calm and made the plays he needed to keep the drive alive. Shimonek got rid of the ball quickly and effectively as well as showing that he can roll out to his right or left to complete passes. Overall I came away impressed and even Kliff Kingsbury agreed saying, “He (Shimonek) is getting sharper. We had a heart to heart last week about protecting the football and not trying to make every throw. He took what the defense gave him and checked it down when it wasn’t there. So there was definite progress from the week before.”