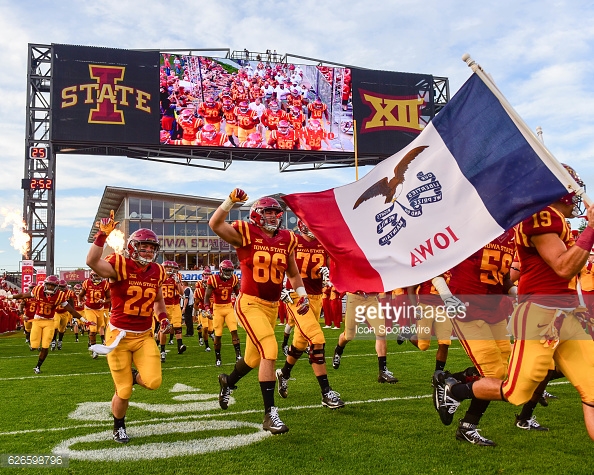 The Iowa State Cyclones are in Year 2 of Matt Campbell and are ready to make big strides. Iowa State won 2 of its final 3 games last season, and played plenty of other close games against Baylor, Oklahoma State, Kansas State and Oklahoma. So, with the Iowa State spring game set for Saturday, there will be plenty of places for fans to keep an eye on. Kickoff is Saturday at 1:00 PM and admission is free! But don’t forget the Cyclone Gridiron Club begins its festivities at 10:00 AM.

How does this transition work? With Iowa State fully committed to Jacob Park at quarterback, Lanning was going to have to move. While many expected something like a situational QB or fullback, the move is middle linebacker. Yes, the Cyclones need help at the position and could use Lanning’s leadership on defense, but this is still a major transition, regardless of one’s abilities.

Defensive coordinator Jon Heacock recently said about Lanning, “You’ve got to appreciate his attitude and his effort, the want-to and all of those things, but he’s made a lot of improvement. He’s doing a good job out there for us. He’s not where he needs to be yet and he knows that, but he’s doing a good job.”

While there’s been plenty of rah-rah about the move, it’s time for us to see what the potential is for Lanning at linebacker. How does he read defenses? How is his lateral movement? Does he play the run or pass better? The Cyclones have solid weapons at the skill positions that will give Lanning a nice challenge during the Iowa State spring game and allow us to see how he’s progressed.