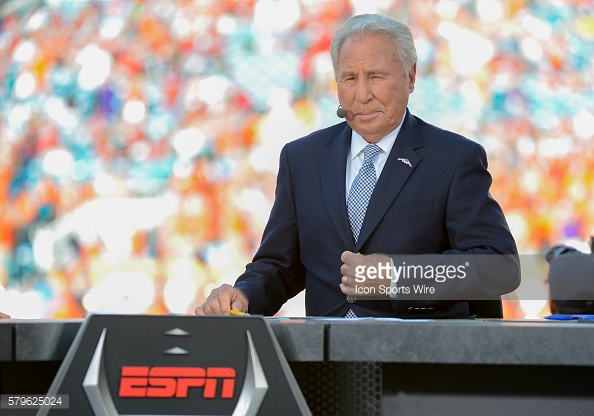 Lee Corso is best known for putting mascot headgear on at the very end of ESPN’s College GameDay show. It’s a tradition he started over 2 decades ago and he’s made a helluva career out of it.

But, in the words of Lee Corso, “Not so fast my friend!” The ESPN analyst recently did an interview with www.houston.culturemap.com where he predicted the possible demise of the Big 12, saying, “I think the one place that’s got to be careful is the Big 12 conference. If the Big 12 doesn’t do something, I wouldn’t be surprised if Texas and Oklahoma leave 4-5 years from now and go someplace else just like Texas A&M did.”

Unfortunately, the interviewer didn’t ask Corso what that “something” the Big 12 could do, would be. So we’re left in the dark.

But Lee Corso has always been known for more of his schtick than actual depth of information and knowledge, and that became apparent in this comment.

First off, Texas A&M left for reasons totally irrelevant to reasons Texas and Oklahoma might one day decide to leave. A&M was sick of living in UT’s shadow and felt they could brand themselves better in a new conference. It worked in 2012 with Johnny Manziel, but since then they’ve been the same mediocre, overhyped and overrated Aggies. Nothing new here.

Secondly, and most importantly, Texas and Oklahoma aren’t leaving in 4-5 years. It’s not happening.

Every University in the Big 12 has contracted their media rights back to the Big 12 through 2025. Essentially, it’s the Big 12, not Texas, Oklahoma, or any of the other schools, that own the rights to broadcast athletic events, basically binding the schools to the conference.

The Big 12 is safe for another 8 years, so Corso’s timeline and prediction is an absurdity that should not be taken seriously.

The Big 12 did not extend its grant of rights last fall when the expansion conversation was ongoing. So once that expires in 2025, you could start to see a shift in the college football landscape and realignment. Of course, there’s no guarantee of that happening one way or the other.

But there are several factors involved here to believe the Big 12 could very well stay in tact.

Texas’ deal with ESPN for $15 million per year runs through 2031. Do you think Texas is going to walk way from that money because Big Ten commissioner Jim Delany wants it to? Fat chance. Now there’s no doubt ESPN regrets the hell out of this deal and would love nothing more than to get out from under it. As ESPN continues losing subscribers by the thousands every month, is it possible, come 2025, ESPN buys out part of the Longhorn Network and convinces Texas to join the Big Ten, SEC, or Pac-12? I suppose. But that is total speculation at this point.

As noted, there will be $105 million reasons (7 years remaining on contract at $15 million per) in 2025 for Texas to have interest in keeping the Longhorn Network, and likely the Big 12, in tact.

Oklahoma/Texas enjoy being the big dogs

As has been discussed at several points in time in predicting the Big 12’s demise, Oklahoma and Texas will no longer “run the show” if they enter the Big Ten or SEC. They’ll have to share the head of the table with the likes of either Alabama, Florida, Georgia, and Tennessee or Michigan, Ohio State, Penn State … you get the point. Right now the Big 12 has a clear hierarchy, and Texas and Oklahoma may realize they prefer that. Especially if…

The two schools start dominating in football. We know how much success Oklahoma has had in recent seasons, winning the past two Big 12 titles. But what if Texas gets back on track behind Tom Herman and they’re competing with OU for the Big 12 Championship most seasons? Both schools may realize that playing in the Big 12 is their best chance to consistently reach the College Football Playoff. That’s worth something.

We are just scratching the surface on this topic, but the long and short of it is: what Lee Corso told the readers of his interview was FAKE NEWS! (::gasp::)

Just be careful what ya read, folks … and keep enjoying Big 12 football!