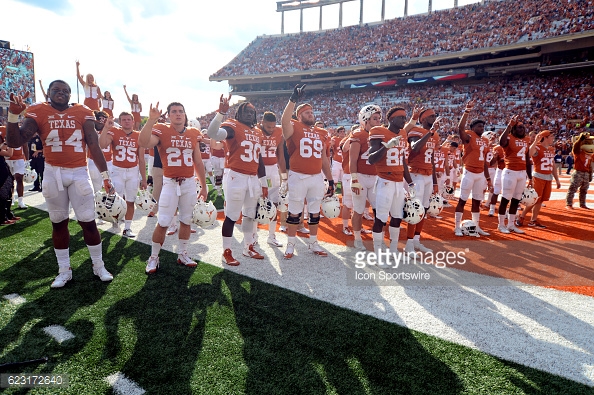 As the Texas Longhorns continue spring practice, running back Kyle Porter’s name came up in conversation during Tom Herman’s meeting with reporters.

Porter has been running with the first team this spring, and Herman praised the running back by saying, “Knock on wood he’s seizing [the opportunity of not being the one hurt] right now. He was player of the game in the scrimmage Saturday. He runs hard.”

But when reporters brought up that Kyle Porter does not use any forms of social media, here was his head coach’s reaction:

“I love it. I think it’s cool any time a guy can go old school.

I think that’s fantastic. That’s like a unicorn these days. You don’t see a 19 or 20-year-old kid without any social media. I applaud him for that.”

No doubt you gotta love the old school style of Kyle Porter. In fact, if I were a head coach, any kid that is off of all social media, he goes up one star in my book. A three-star recruit become a four-star guy and a four-star recruit jumps up to a five-star.

Herman may only be 41 years old, but he’s clearly also on old-school guy. We knew that from his coaching style and practice style, however now we really know that when he forgets about Facebook and throws in a little Myspace to the conversation.