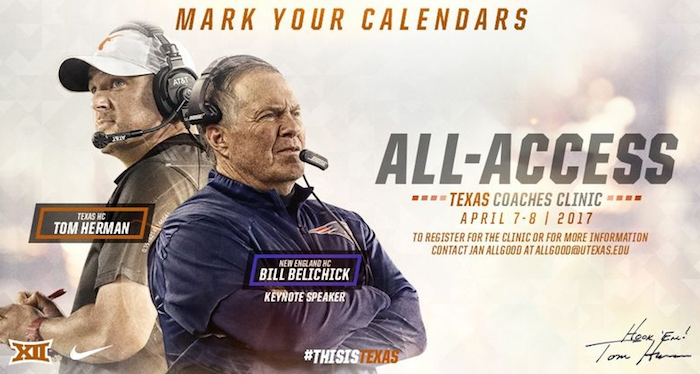 When you think of the current hierarchy of football coaching, there is Bill Belichick and then there is everyone else. Nope, not Nick Saban, Urban Meyer or Jim Harbaugh. Only Bellichick has had this kind of success at the highest level in the sport.

The Patriots head coach will be at the University of Texas to be the keynote speaker at the All-Access Texas Coaches Clinic for High School Coaches.

Following practice on Tuesday, Longhorns head coach Tom Herman told reporters, “He [Belichick] is going to speak to our staff and certainly we’ll try to get him in front of our team before practice. He’s scheduled to spend a couple hours with our staff. It’s a tribute to what the University of Texas is. It’s a tribute to the guys who’ve played for us, not just at the University of Texas, but us as a coaching staff and guys who’ve gone here, the Malcolm Browns of the world, that Coach Belichick would think enough of us to want to do that. Again, it’s our privilege to give that back to the high school coaches in state. It’ll be, according to Jan Allgood, the most attended high school spring plan that we’ve ever had here, which is a testament to obviously his draw power, but also our relationships with the high school coaches and their feeling welcome to come here to Austin.”

Fired up to have the best coaches in the country on our campus in a few days! April 7th & 8th can’t get here fast enough! #ThisIsTexaspic.twitter.com/zR4YHzXAUo

Bill Belichick has won seven Super Bowls, five of them coming as head coach in New England, including a 34-28 win over the Falcons last season to win Super Bowl LI.

This should be a great event for Herman, his staff, the Texas players, and all the high school coaches that will be in attendance. Frankly, I’m jealous! Soak it all up, fellas.