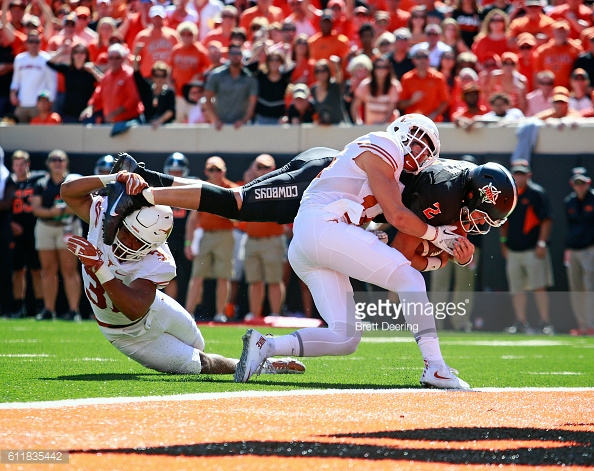 A new report from Jenni Carlson in The Oklahoman says Oklahoma State QB Mason Rudolph played most of the 2016 season with a cracked rib.

Rudolph told the Oklahoma City newspaper, “No one really knows that at all. We kept that in house.”

Rudolph told Carlson that the injury happened on a 10-yard touchdown run in the second quarter of the game against Texas, when he was crushed between two defenders. Rudolph said he could “barely move” and knew something was wrong right away.

The header photo used in this article is the hit that Rudolph says he cracked his rib on.

Now this never really hurt the Pokes throughout the season, as Rudolph finished the season with 4,091 passing yards, with 28 touchdowns to only 4 interceptions. The Pokes went 6-1 in games after Rudolph cracked the rib.

While it’s great to know Rudolph is fully healthy, and it’s scary to think how good he can be at 100%, I don’t think much can be taken out of this news in terms of what kind of impact it will have on the Cowboys in 2017.

Whether Mason Rudolph is 70%, 80% or 100%, the Pokes will have no issues at quarterback, or on most of the offense. This season will come down to whether or not the defense can step up to the plate enough to give this team a chance to win the Big 12 conference.

Oklahoma State continues its spring practice this week and their spring game is planned for next Saturday, April 15th and kicks off at 1:00 at Boone Pickens Stadium.

The Cowboys are coming off a 10-3 season and win over Colorado in the Alamo Bowl. The Cowboys have gone 104-50 over the past 12 seasons under Mike Gundy.