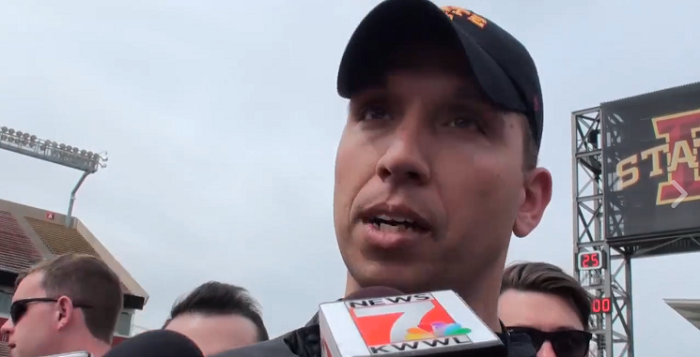 Spring football is a time for optimism, and Matt Campbell in his first full year (2nd spring camp), with Iowa State, feels great about where his team is. Following the Iowa State spring game on Saturday, here are some of Campbell’s key comments.

General review: The thing that I saw that I really do like, we made great growth from where we left off last season, to where we started in January, to where we ended out in winter conditioning, and today I feel the same way. This team and these young men continue to grow. And that’s something all of us coaches have really liked about this team… we’re still learning, we’re still learning, and that won’t become an excuse come the fall, but it gives us great motivation going into the summer.

Jacob Park: He’s a guy that plays with great confidence. I really like where Jacob is headed, but Jacob knows there are no days off. At the position he plays, you’ve got to make great strides every day. I think Jacob leaves spring practice, the last 7 days of spring practice, playing the best football I’ve ever seen Jacob Park play. But, again, that doesn’t mean a whole lot right now. We’re in spring and there’s a whole lot of work that needs to be done.

Joel Lanning: Joel’s a guy that got better every day… The guy’s a great athlete. I would’ve never put Joel in a position to fail. He’s a guy that has elite athletic ability, especially for big skill players. And he just kept getting better every day. It was great to see him have some success today. But, I’ve got to be honest with you, go look at the tape from 14 practices ago, you could see him have that kind of success. But a lot of work to do though, that’s a hard transition to make. And I’m not silly, I know what kind of work ethic it’s going to take to get where he needs to go so he can play at that rate consistently. But I wouldn’t doubt Joel Lanning.

Offense Line: I thought the 1-O-line looked pretty good today. Again you’ve got some defensive guys out. We didn’t have Jake Campos, so you don’t know how to truly judge that. It’s unfair to make any outlandish statements other than that I would say there’s great growth in that group. I think Oge [Udeogu] has been a great surprise. He’s got a chance to be a very high-end football player. I think [Bryce] Meeker has had a phenomenal spring … we gotta get bigger, we gotta get strong and we’ve got to grow. But I am excited about the growth they made and coach Manning did a great job with those guys this spring.

Is Garrett Owens the starting kicker: I would definitely say that right now. Great to see him in a two-minute situation, with a little pressure, and come in and kick… he’s had a really, really good spring. Garrett is one of those kids, he’s worked really hard and it and he keeps getting better. But a lot of competition still and that’s why you have fall camp.

Defensive line: I think we all see the potential and we all see the ability. If you watch practice you see what you see with young players. You see some really good days and you see some days that aren’t so good. The reality is the next 16 weeks we gotta take the inconsistencies out of their games… There’s a lot of potential, but we’ve got to turn that potential into reality real fast.

How are you leaving this spring game: The maturity of this team allows me to have confidence… that the next 16 weeks are paramount to any team’s success because the coaches can’t have that stranglehold on ’em day in, day out. So you better have mature team and you’ve got to have leadership and have guys that are willing to lead the way when nobody’s watching. Last year we weren’t ready for any of that, and it showed, to be honest with you. It showed really early in the season… now I feel like we’re a lot closer to where we need to be in terms of that.