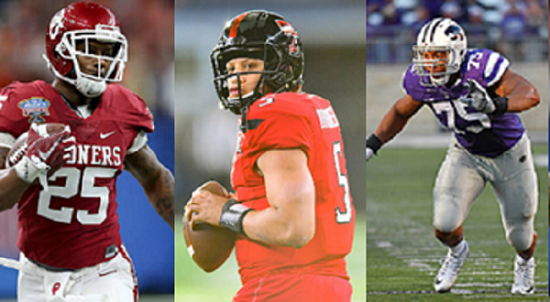 With the 2017 NFL Draft less than three weeks away, there are three Big 12 players who are rapidly shooting up many NFL Draft boards. One of these players has a unique (to put it politely) situation, while I just wonder if the other two never got the credit they deserve because NFL scouts don’t view the Big 12 in the same light as their Power 5 brothers.

Remember when people actually thought Joe Mixon wasn’t going to get drafted because he punched a woman in the face in 2014? Yea, that was always pretty ridiculous. Not ridiculous because he shouldn’t, but ridiculous because in the end, teams want talent. They talk and big game and point to Ray Rice, but the reality is: if a team thought Ray Rice could play at a high level, he’d still be playing on Sundays.

Mixon averaged seven yards per carry for 1,183 yards with eight touchdowns last season for OU. But the fact that he can also catch it out of the backfield and be a return man for teams makes him that much more valuable. With the Sooners last season, he had 32 receptions for 449 yards with five touchdowns.

Mixon has been on an extensive tour lately, meeting with teams across the country, including the Buccaneers, Eagles, Chargers, Broncos and Raiders. Teams want to meet him, and it’s just a matter of who sincerely believes the young man has turned his life around from a big-time mistake?

Many “experts” are predicting second to fourth round for Mixon. But it wouldn’t shock me to see him get scooped up late in the first round or early in the 2nd round. He will go higher than many people expect.