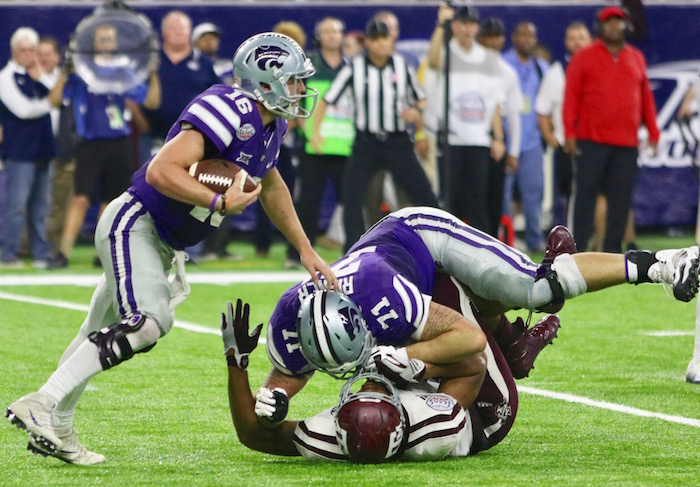 There is no conference in America that has quality at quarterback, and amount of pass-happy offensive coordinators and head coaches like the Big 12 does. But as a result, often times the running games get overlooked in the conference. Unless, of course, you’re in Manhattan, Kansas. As spring practice continues for the Wildcats, Kansas State’s rushing attack is likely gearing up to be the best in the Big 12 this fall.

Like any running game, so much is predicated on the success and quality of the offensive line. And there will be no better run-blocking team in the Big 12 than the Wildcats this fall. Kansas State returns four out of five players on an offensive line that was considered one of the best in the nation last season, according to Pro Football Focus.

The returnees on the front five include Scott Frantz, Abdul Beecham, Reid Najvar and Dalton Risner. Risner was a First Team All-Big 12 player last season, as was fullback Winston Dimel, who of course gets involved with the run-blocking schemes.

Last season, Kansas State ranked 4th in the Big 12 with 231 rushing yards per game, behind Baylor, Texas and Oklahoma. But when looking at all those teams, there are reasons to believe their respective run games will take a step back. Baylor is getting a shake up on offense and scheme with new head coach Matt Rhule, and its offensive line is thin with many question marks. Texas returns a very quality offensive line, but stud running back D’Onta Foreman is off to the NFL, and there are health concerns for Chris Warren III. Meantime, Oklahoma loses Samaje Perine and Joe Mixon. The Sooner do have a ton of talent at the position in Rodney Anderson, Abdul Adams and Trey Sermon, but it’s a mostly unproven group.

That leads us back to Kansas State. Not only do the Wildcats return the best offensive line in the Big 12, but Alex Barnes is poised to become the best running back in the conference.

Barnes quietly led the Big 12 by averaging 7.89 yards per carry last season, which also ranked first in Kansas State history. He totaled 442 rushing yards and six touchdowns on 56 carries, ranking second in school history in rushing yards and touchdowns by a freshman. Considering he was just a redshirt freshman last season, Barnes is mature beyond his years, and never tried to do too much. Need proof? He was the only player in the Big 12 with at least 50 attempts to not have a negative rush.

As for the rest of the backfield in Manhattan, Justin Silmon is now a redshirt junior and looks to build on his first season where he saw starting duties, and a strong finish, which included ending the regular season with 133 yards and two touchdowns at TCU, both career highs.

Dalvin Warmack could become that shifty, change-of-pace running back, at just 5’8”, 187 pounds, Warmack is an elusive player who will become more of a household name this fall. Don’t forget he came in with big expectations as the top prep football player in the Kansas City metro area in high school. Throw in redshirt freshman Tyler Burns, and in many ways it’s an embarrassment of riches in this backfield for Bill Snyder and company.

Then, of course, there is Jesse Ertz, the best, and most efficient, running quarterback in the Big 12. Ertz was a 1,000-yard rusher last season, his first fully healthy season since getting to Manhattan. His vision and agility will only improve this fall, especially behind this offensive line.

Also expect the improvement of Kansas State’s passing game behind Ertz and wide receiver Byron Pringle to improve, which will only keep defenses even more honest. In turn, this will open up more lanes for the running attack.

So while ESPN decides it’s going to give Oklahoma a 77% chance to win the Big 12 conference (absolutely ludicrous), the rest of the conference, including Kansas State, will keep flying under the radar and prepare to surprise the nation this fall. In Manhattan, it will all be predicated on the running game, which should end up as the best, and most effective, in the conference.