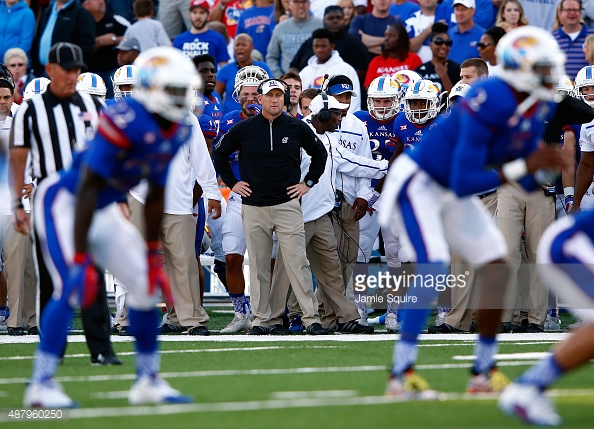 If you haven’t heard it, get used to hearing that phrase around the Kansas football program.

Our #Louisianimals brought a taste from home to Lawrence today ?? pic.twitter.com/TG9Iq32qaQ

As associate head coach Tony Hull continues to make his mark with heavy recruiting in his home state of Louisiana, it’s a catchphrase that has been used more frequently in Lawrence.

Soon after the 2017 class was locked up, Hull started crushing the 2018 class, which in February included the verbal commitments of six star-studded high school juniors who said they were going to play at KU. But soon after, two of them, three-star defensive lineman Nelson Jenkins and four-star receiver Ja’Marr Chase, pulled back on their commitments. Two “Louisianimals” gone.

As impressive as all this is for Beaty, Hull and the KU football program, it’s a very risky strategy as well.

If you truly believe that all four of these three and four-star prospects from SEC Country are going to stay fully committed to a team that’s been the doormat of the Big 12 for nearly a decade, I’ve got a bridge to sell you.

With that being said, I hope I am wrong. Nothing would be more exciting than for the Jayhawks to stick it to the SEC and raid its backyard, just like so many SEC teams have been doing to Texas, which used to be the Big 12’s backyard.

I’ve long been a proponent of the powerhouses like OU and Texas taking a stronger look in SEC country like Louisiana, Alabama, etc., to get back at what the SEC schools have done to raid Texas. But neither program has really gone that route in recent seasons. Texas has done most of its work in-state, while Oklahoma has continued to rely on Texas, but Bob Stoops has also taken a very national approach to recruiting and has had a lot of success in California.

I love the stones of Tony Hull to really believe he can get these guys to Lawrence.

But the reality is this: David Beaty needs a back up plan, and a darn good one.

If he doesn’t, and these guys decide playing at LSU, Ole Miss, Texas A&M, or South Carolina, is more appealing than Kansas, than Beaty and company can’t be caught with their pants down.

One of the reasons Beaty was brought in as the Kansas head coach was because of his strong ties to the Texas high school scene. This needs to remain a priority for Beaty as he continues to build his program. Plus, a commitment needs to be made to trying to keep the best players from Kansas in the state.

Of course Kansas isn’t as fertile a recruiting ground as Texas or Louisiana. But, there is always pride for players to stay in-state, especially if they believe they can resurrect a program. Of the top-rated recruits from the state of Kansas in the Class of 2017, none of the top-10 players went to Kansas, according to 247 Sports. Meantime, four of them ended up going to Kansas State.

KU did land 4 guys outside of the top ten, but if Beaty and Hull want to go for big fish, why not take your chances in the Sunflower State? The odds of getting a commitment to stick are far greater.

In the 2017 class, the top 3 players from Kansas ended up in the Big Ten, or Independent. Defensive end Trevor Kent from Pittsburg committed to Northwestern, cornerback Djimon Colbert from Mission chose Iowa, and wide receiver Jafar Armstrong, also from Mission, decided on Notre Dame. All were three-star players and these are examples of targets Beaty should be hammering away at as well.

Kansas’ 2017 class did have 6 of 21 commitments from in state, but so far the 2018 class doesn’t have a commitment from the state.

I believe in David Beaty’s brick-by-brick method to building this program.

But the worst thing that could happen to the Jayhawks is becoming too reliant on home-run prospects from heavy SEC country and getting burnt late in the recruiting cycle.

I’m all for “hunting down” the “Louisianimals”, just make sure to proceed with caution.