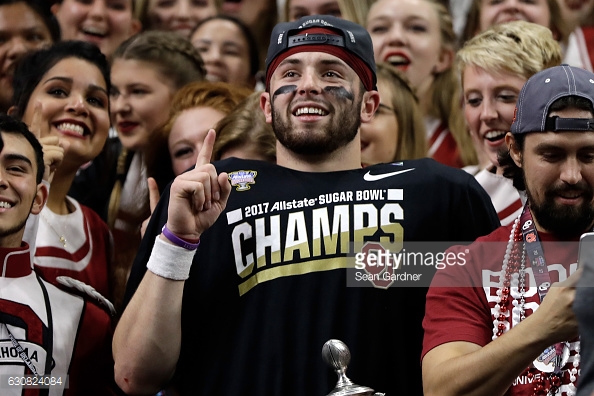 The folks in Las Vegas are giving plenty of love to Oklahoma quarterback Baker Mayfield. He has the second-best odds (7/1) to win the 2017 Heisman trophy, only behind USC quarterback Sam Darnold.

Hot off the presses from @LVSuperBook…

But, as he’s done most of his career, quietly coming in with the 7th best odds in the country is Oklahoma State quarterback Mason Rudolph at 15/1. Frankly, I’d take my chances with that number.

Darnold at 5/1 is ridiculously high. USC is getting wayyyy too much hype, in typical USC fashion, for its 52-49 win over Penn State in the Rose Bowl. When is the last time a USC team and USC quarterback actually lived up to the kind of hype the Trojans have received this offseason. It always ends up in disappointment in Los Angeles.

Other Big 12 faces on this list include Texas quarterback Shane Buechele at a surprising 50/1 to win the Heisman Trophy, the third-best odds of any player in the Big 12. Just as of a few weeks ago it was believed true freshman Sam Ehlinger might be able to take the starting job away from Buechele, but the rising sophomore has taken the majority of the first-team reps so far in spring camp.

Then, there’s Oklahoma State wide receiver James Washington coming in at 80/1. No doubt he’s the favorite to win the Biletnikoff Award, but no wide receiver has won the award since Desmond Howard in 1991. So, that also leaves the odds pretty slim for Oklahoma WR Mark Andrews, the only other player from the Big 12 on this list, at 100/1.

You want my non-Big 12 dark horse on this list? Mississippi State QB Nick Fitzgerald at 100/1. The Bulldogs have two cupcakes to open up their season, and then a September 16th match up at LSU. Fitzgerald is a really good dual-threat QB, and if he takes a solid Mississippi State team into Death Valley and wins that game, the chatter may start picking up.