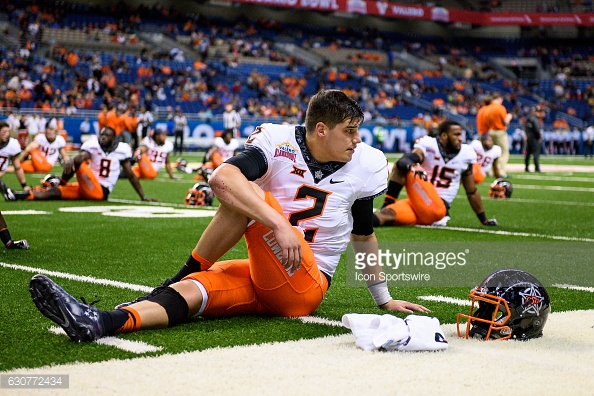 5. Who’s the other receiver?

James Washington is amazing. An All-American season and a Biletnikoff Award are easily within reach. The question remains: who is the true No. 2 guy? The receiving corp as a whole is extremely talented, but will someone separate themselves as the go to guy after Washington? The towering Marcel Ateman returns from injury, Chris Lacy has shown flashes, and the speedy Jalen McCleskey is dangerous in the slot. Former five-star recruit Tyron Johnson joins the fold this season as well after transferring from LSU. Having a second target that requires a lot of attention would turn an already deadly offense into Armageddon on turf! Who becomes Mason Rudolph’s second-favorite target at the Oklahoma State spring game? If just one of the other wideouts can become someone the defense absolutely has to focus on, it would be almost impossible to slow the Pokes down! With Washington and Rudolph almost certainly being on different squads this weekend we should get a solid idea of who the quarterback thinks is the next best guy to throw too.

How many mullets have been grown to honor Mike Gundy’s? This isn’t Norman where fan mullets are a plenty. You’d have to be a pretty big fan to emulate Gundy’s now famous hair as some form of support to the team. But a lot of people that go to the spring game are pretty big fans. I’m willing to bet there’s a big jump in the amount of Joe Dirt’s in the stands at the Oklahoma State spring game.

Not that there was ever a doubt, but Mike Gundy will continue as the head football coach at Oklahoma State after agreeing...