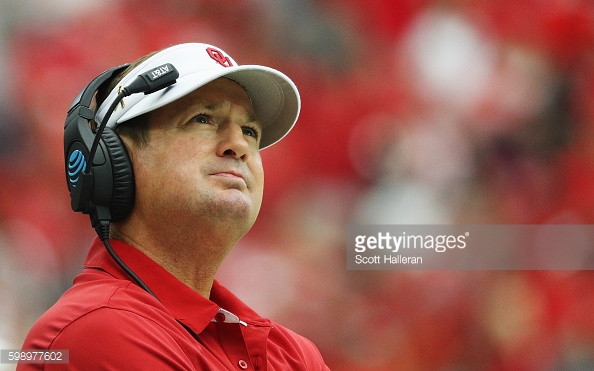 In December, we all saw the video of Joe Mixon punching a woman from 2014. I was as disgusted as you were. I believed Mixon should have been kicked off the team when it happened, and felt he was only kept on campus because of his 5-star recruiting status.

But after reading and listening to different folks with different opinions, viewpoints and angles on the story and topic, I amended my stance and understood how Mixon’s one-year suspension may have been appropriate.

But after the latest incident involving Oklahoma cornerback Parrish Cobb, who was just arrested for the second time in the past 3 months, this time for armed robbery, there are questions Bob Stoops needs to answer and changes that need to be made regarding his program as a whole.

Guys aren’t getting it. Mayfield event admitted as much, saying this week, “I think people have let it slip a little bit and gotten a little lackadaisical about all the off-the-field stuff. I think it can be said that I might have set a bad example first, but we all know there’s a higher standard here — not just being quarterbacks, but at the University of Oklahoma. There’s a tradition here at Oklahoma that compares to no other.”

But, here was the mistake by Mayfield, who followed up that statement by saying, “They’re [coaches] not letting anything slip. That’s not something Coach Stoops or anyone on his staff would ever let anybody let that slip. He’s always done his job well, and we have to do ours. They bring us here for a reason, and we have to rise up to the occasion and do that.”

But at some point, it is on the coaches. And we are long past the point with the program.

This latest arrest is the fifth arrest of an Oklahoma player this offseason. Mayfield and fellow QB Chris Robinson, as well as defensive back Ronnie LaRue, have all been arrested since the end of the 2016 season.

You want to argue semantics? Sure, kids getting drunk and busted isn’t the biggest deal in the world. And no, I am not comparing Baker Mayfield drunkenly running from the cops to Joe Mixon hitting a woman or Parrish Cobb’s armed robbery.

But I’m going to revert to the old “Rule of Three”: Once could be an accident, twice a coincidence, but three times is a trend.

In 2015, Clay Travis did a study on which college football teams have had the most arrests in the previous 5 years. At that time, Oklahoma ranked 5th in the country. And since then things haven’t gone much more smoothly.

In our latest incident with Parrish Cobb, a University spokesman told ESPN.com, Cobb “has not been enrolled at OU and has not been a member of the football team since January.”

But here’s the problem: when Cobb turned himself in after authorities issued an arrest warrant for aggravated robbery in Waco in January, he was not expelled, he was simply “suspended”. Would he have had a chance to get himself back on the team? I guess we’ll never have a chance to find out.

A few months ago, when it was uncovered that Dede Westbrook’s arrests prior to OU had not been uncovered by background checks, Bob Stoops scoffed, “We have extensive background checks. I’m not part of that. Again, so I’m not sure how that happened.”

If I may make a suggestion, it’s time for Stoops to become a part of them.

This is his program and these are young men he is ultimately responsible for.

Oklahoma fans are likely going to read this (if they haven’t closed out this article in frustrated, while cursing me off) and say, “well hey, at least we aren’t Baylor!”

That’s not the point, plus it’s a horrible argument. If you get busted robbing a bank, are you going to ask the cops for sympathy by saying, “well hell guys, I’m not exactly Butch Cassidy here!”

This is about what is going on at Oklahoma. It’s not about anyone or anywhere else.

And yes, it’s concerning. It’s concerning based on some of the characters that have been welcomed on campus in recent years, and even the more petty issues (drinking) have to make you shake your head.

It’s time for Bob Stoops to take a real stand with his team and players, and restore the integrity, discipline and character it’s had for much his tenure.

If Bob Stoops doesn’t tighten his own ship, forgetting winning the Big 12 or College Football Playoff, the issues will only become far bigger and deeper for his program.