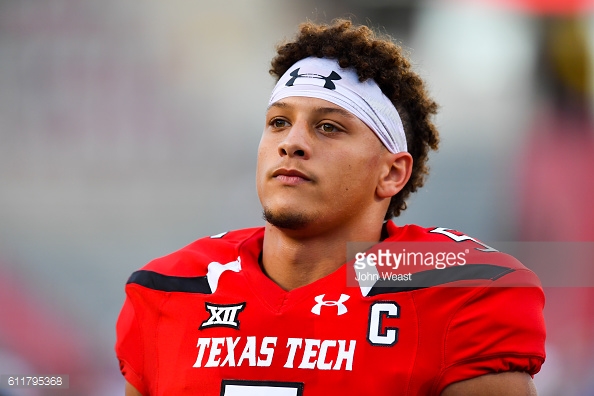 Could Patrick Mahomes end up remaining in the Lone Star State? Well, according to one report, Bill O’Brien and the Houston Texans are falling in love with the former Texas Tech quarterback.

File this away: One NFL coach who has done homework on all the top QBs told me word is Bill O’Brien “absolutely loves” Patrick Mahomes. https://t.co/SYvUyLWlAC

Now anytime you’re a couple weeks out from the NFL Draft, you have to take every report and rumor with a grain of salt. So much of what is going on right now is a game of chess between general managers and coaches.

While Mahomes isn’t expected to start right away for the Texans, or whoever drafts him for that matter, O’Brien reportedly believes he can develop Mahomes into a great quarterback. There’s no doubt Mahomes has the physical abilities, poise and maturity to take the coaching and teaching from someone like O’Brien.

But would there be pressure to throw Mahomes on the field earlier than he probably should be? Considering the only quarterbacks on the Texans roster right now are Tom Savage and Brandon Weeden, is it that unlikely to see Mahomes beat them out in camp for the starting job? Plus, if Weeden and Savage struggle mightily, you know the Texans fans will be clamoring for Mahomes and possibly chanting his name at games when their team is getting smoked by three touchdowns at home against the Patriots.

The other problem with Mahomes possibly landing in Houston is that the Texans don’t pick until #25 in the first round. Considering there have been reports of Mahomes being selected as high as No. 6 by the Jets, I see little to no chance the former Texas Tech quarterback is still on the board at No. 25.

What say you? Are the Texans a fit for Patrick Mahomes? Let us know in the comments!