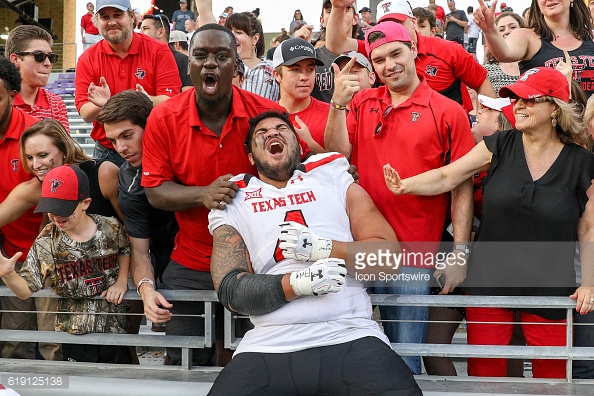 In what was one of the biggest blows to the Texas Tech offseason, former Red Raiders defensive tackle Breiden Fehoko has decided to transfer to LSU.

Breiden Fehoko will sit out the 2017 season because of NCAA transfer rules, but he will be eligible to play in the 2018 season and will have two years of eligibility remaining.

Fehoko’s was one of the prizes in Kliff Kingsbury’s 2015 class. The Hawaii native and 4-star recruit picked the Red Raiders over offers from Alabama, Clemson, Oklahoma, Ole Miss, Stanford and several others. Most recruiting services had Fehoko as a top-50 prospect in the nation and a top-10 prospect at the defensive tackle position. Also, he was named an Under Armour All-American.

He played the past two seasons with the Red Raiders, starting in 25 games and recorded 38 tackles, 7.5 tackles for loss and a pair of sacks.

Fehoko announced in January that he would be transferring from Texas Tech, hoping to move to a school that he believed would further improve his game as a defensive lineman. He went on to make official visits to Auburn, Louisville, LSU and Georgia.

The loss of Fehoko was a big blow to a Texas Tech defense that was already struggling as the worst in the Big 12.

We’ll never know what exactly the disconnect was between the defensive lineman and the Texas Tech coaching staff, but the idea that a defensive lineman can’t further his game and career in Lubbock doesn’t seem to be a fair assessment.

Granted, when you think about developing defensive lineman, Alabama and LSU top the list. We wish Fehoko all the best, but the amount of guys who transfer for reasons such as this seem disingenuous to me. The majority of the Tech coaching staff is the same group of guys as when Fehoko committed. Oh well, that’s college football today.