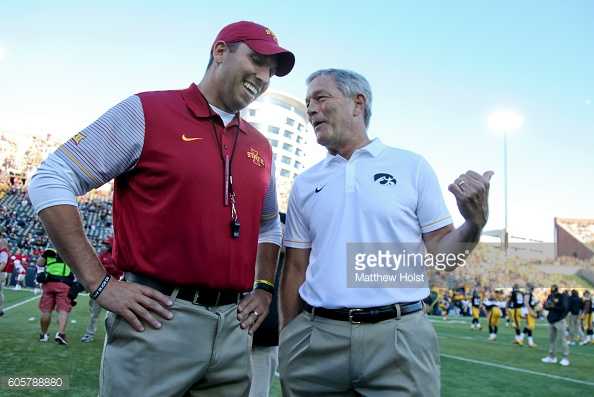 Iowa State University announced news on Tuesday that will please all college football fans across the state. The Cy-Hawk series has been extended two more years, and will run through 2023.

The current contract expires in 2021. Iowa State will travel to Kinnick Stadium in 2022 and will host the Hawkeyes at Jack Trice Stadium in 2023.

After a 43-year hiatus, the series picked back up in 1977. Iowa holds an overall 42-22 advantage in the series, but it’s been Iowa state who’s controlled things over the past couple of decades. Since 1998, Iowa State has a 10-9 edge.

This fall, the game is at Iowa State on September 9th. The Cyclones will be looking for revenge following last season’s 42-3 loss at Iowa.

Overall, this is a great game for the entire state of Iowa. Anytime you can get the two biggest programs in a state to play each other on a yearly basis, it becomes a holiday of sorts for the state and brings everyone together.

Bedlam is great for the state of Oklahoma, the Sunflower Showdown is fun for the folks in Kansas, I just wish we could finally get back Texas and Texas A&M. I know we’ll never again have it as a Thanksgiving staple, but if only we could see the two teams play an annual game in Week 2. It would get massive national attention and would give each team a really good non-conference opponent (especially since A&M is always really good in September and October, before falling off in the second half of the season).

But all in all, it’s great to know the Cy-Hawk series will continue at least through 2023. And I have a funny feeling we’ll see a much more focused and motivated Cyclones team in this year’s match up than we got in 2016.