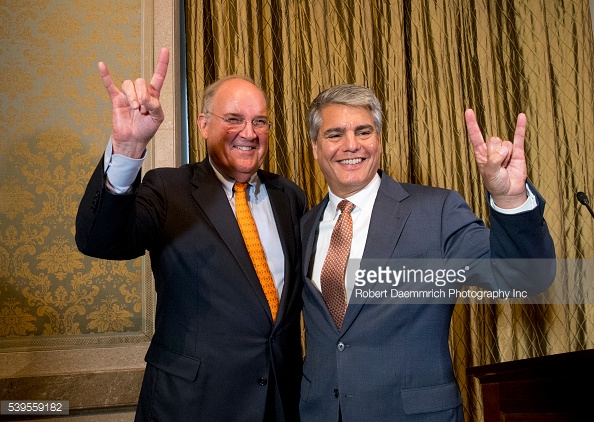 In a wide-ranging interview with The Dallas Morning News, University of Texas President Greg Fenves touched on several topics. Most notably, Fenves gave his thoughts on athletic director Mike Perrin.

Perrin was named interim AD in September 2015, replacing the controversial Steve Patterson. And while Perrin doesn’t have a traditional contract, Fenves said “I do” expect Perrin to stay on, at least through the 2017 calendar year.

There had been various reports that Texas may start searching for a new AD as early as late in the spring, but Fenves implied that that was not going to be the case.

Perrin has had to make a pair of big hires to date. First off, he had to fire Charlie Strong and hire Tom Herman as the head football coach, while also bringing on Tulane’s David Pierce to be the next baseball coach.

Fenves praised Perrin saying, “I think Mike has done a very good job. We had some real problems to solve, and he’s solved them. We’ve made some important coaching transitions, baseball and football in particular, and he’s done that very well.”

Greg Fenves also told DMN that all of the the money used for the 43-inch TVs in the new Texas football lockers were funded by the athletic department and not by taxpayers. But that defense doesn’t stop many folks from using this as an example as to why players should be paid.

Overall, Perrin has done a really good job in a difficult situation. He had to reunite a egotistical donor base that was frustrated with an outsider like Patterson running the show as if Texas were a pro franchise. Then, he had to deal with Charlie Strong’s job status and making the difficult decision to fire him. Then, there was the replacement of legendary baseball coach Augie Garrido.

Maybe Texas thinks there’s some big up-and-comer who could take over the athletic department, but there are so many political angles to the job, having someone who knows the players and is a “Texas guy” like Perrin, might be the best thing for the University.

In fact, I know it is. Let’s see if the Texas power players agree.

The twists and turns of the Cale Gundy saga continued on Monday afternoon, one day after the longtime Oklahoma assistant coach resigned....

Everyone is reacting to the news from Sunday evening when longtime Oklahoma assistant Cale Gundy announced he would be resigning from the...

We are officially inching closer towards the start of the 2022 college football season as preseason polls begin to get released. On...

SEC will play more FCS opponents than any other Power 5 conference, AGAIN
Tom Herman is still lying about how Houston job ended
To Top