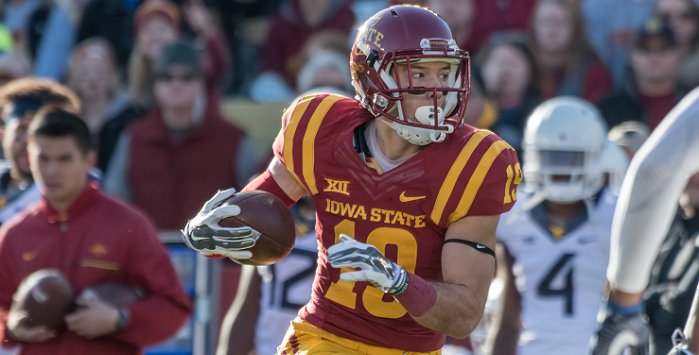 Just when you think you’re having a busy day, think about Iowa State punt returner and sprinter Trever Ryen.

The multi-sport athlete has the kind of jam packed day that might make you feel bad about yourself.

“I wake up around 5 a.m. and I’ll head to football meetings or workouts and then I’ll go to class, typically two classes a day through the week. In between there, I’ll do what I can to get homework done. After that, I might have track practice in the spring. Then it’s about 5-5:30 and I’ll hopefully go home and study or take a little break and then study an hour at night. And before you know it, it’s time to go to bed around 9:30-10:00,” Ryen told Heartland College Sports.

But, plenty had to happen for Ryen to end up in Ames. The Ida Grove, Iowa native began his college career at University of  Northern Iowa, where he only participated in track. But he just couldn’t kick his love of football. Who could blame him? During his senior year of high school he rushed for 1,280 yards with 19 touchdowns, averaging nearly 9 yards per carry. He was named a First-Team All-State Class 2A selection in 2012.

However, Ryen wanted to test his abilities at the highest level possible. That call he made to his parents one evening at UNI is one he’ll never forget, saying, “I called my mom and dad and said, ‘hey, I know you’re going to think I’m crazy, but  I want to transfer. I want to go to Iowa State and play football and maybe run track.'” Well, right on cue, his parents initially questioned his decision, since he was on scholarship at Northern Iowa and would have to be a walk-on at Iowa State.

He asked his parents for his trust and to understand his goals and visions. They did. Ryen added, “they were there for me. They told me it was my decision and they were 100% behind me. They enjoy coming to Iowa State and coming to my track meets, they just love it, and I enjoy all the support they have given me. There’s no way I can ever repay them back for what they’ve done for me.”

Speaking of support, Ryen’s ace in the hole is his fiance, who just graduated with a dietetics degree. Ryen goes to her for a lot of nutrition tips to help better his routine and his recovery.

Considering how little time off he has between sports, nutrition is even more important. “I’ll take a week or so off between football, and then get right into indoor track. With spring ball, I literally got done running Big 12’s that weekend [Big 12 indoor track championship February 24-25] and then that Monday I started spring ball. And then over spring break, instead of going somewhere or going home, I decided to run track and we went down to Tulsa. I kind of just go right back into it,” Ryen said.

When Trever Ryen came to Iowa State, he initially was only a football player. He said it was winter break of his first year at Iowa State when he started missing the track and approach former head coach Paul Rhoads about running, adding, “Coach Rhoads was pretty cool with me running track and it went pretty smoothly. When I went in to ask him, he was all for it and just told me to not let it conflict with football and the conditioning and working out, which I said it never would.”

When Ryen got to Iowa State in 2014, he redshirted his first season and started playing in 2015. He earned a scholarship after just the third game of the season. Last season, Trever Ryen was a First-Team Academic All-Big 12, along with being a semifinalist for the Burlsworth Trophy for the nation’s best former or current walk-on, plus a member of the Paul Hornung Award watch list (given to the country’s most versatile player).

But it wasn’t always smooth sailing as a former walk-on. Ryen said he only knew two players coming into the program, adding, “but I knew I had to prove something. The team and coaches knew I ran at the Division I level, so they knew I had speed to give, so everything I did I tried to go full speed to try to get noticed on special teams and the scout team.”

It sure did work out. ESPN named Ryen to its First-Team All-Big 12 in 2016. He was one of the nation’s best punt returners, averaging 16.5 yards per return (12 returns) and led the league with six punt returns of 25 yards or longer. Ryen also finished second on the team in receptions (37) and fourth in receiving yards (388).

As for what’s next? If all goes according to Trever Ryen’s plan,  he’ll be on the track until early June. There are two outdoor meets left before the Big 12 Outdoor Track and Field Championship in Lawrence, Kansas from May 12-14, followed by Regionals and possibly Nationals in early June.

As for wrapping up spring camp and getting ready for Matt Campbell’s second season, Ryen is already exciting, saying, “The vibe is really upbeat and we’re really excited to what this program can take off to be. Coach Campbell has a great plan for every single one of his football players, be it in the weight room, nutrition room, academics or even on the football field, he 100% bought into us, and everyone on the team is 110% bought into him.”

He then added, “We just can’t wait until September 2nd [coincidentally against UNI] to kick it all off.”