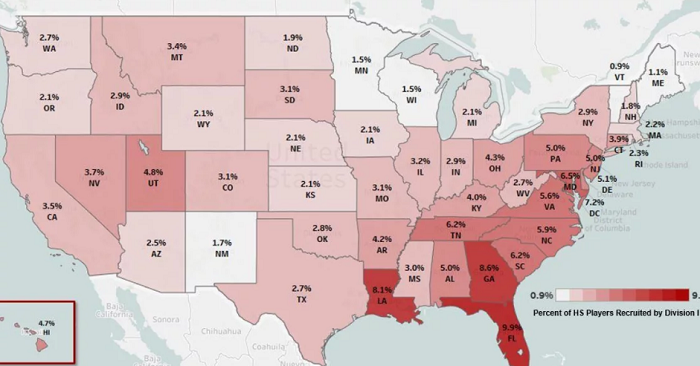 Here is the full map:

When we think of the best high school football recruits in the nation, typically the states that come to mind are Texas, Florida and California. The second tier, at least to me, has always Georgia, Louisiana, Ohio and Pennsylvania.

But remember, the advantage that Texas and California have over that “second tier” was a sheer numbers game. Texas is 2 and a half times as populated as Georgia and Ohio, while California has nearly 4 times as many people as those two states.

This stat is more about quantity over quality.

So while Florida has nearly 10% of its high school football players getting to play Division I football, Texas is under 3 percent.

And here’s something I never expected: out of the 5 Big 12 states, Oklahoma has the highest percentage of recruits getting to play Division I.

Now of all the Power 5 conferences, this NCAA study says Oklahoma’s 2.8% is the lowest for any conference in terms of the top state in its geographical backyard.

What does this mean? The Big 12 schools, which by the way, outside of Texas, are less populated than most of the other states in the Lower 48, need to be even more protective of their turf.

One of the issues for the conference recruiting in recent seasons has been the amount of SEC teams that are going into Texas and taking the top recruits, who in years gone by, would have ended up at Texas, Oklahoma or maybe a different Big 12 school. With Texas A&M moving the SEC’s recruiting map to the west, it’s opened up much of Texas, especially the eastern half of the state, to SEC schools.

Coaches such as Bob Stoops, and former Texas coach Charlie Strong, have started diving into SEC country, especially Florida, to recruit. Meantime, Kansas is making a solid entrance into Louisiana.

But I still would prefer to see the Big 12 get back to dominating Texas and owning the state. Tom Herman has made that a mission of his at Texas.

What about Oklahoma? Well, here’s the reality: Oklahoma has under 4 million people living in the state, compared to Texas, which has over 25 million. Yes, make sure the best Oklahoma players stay in the Big 12, but the numbers game says that Texas is still where the Big 12 needs to put its focus.

How do you interpret this new NCAA study and how it affects the Big 12 conference? Let us know in the comments!